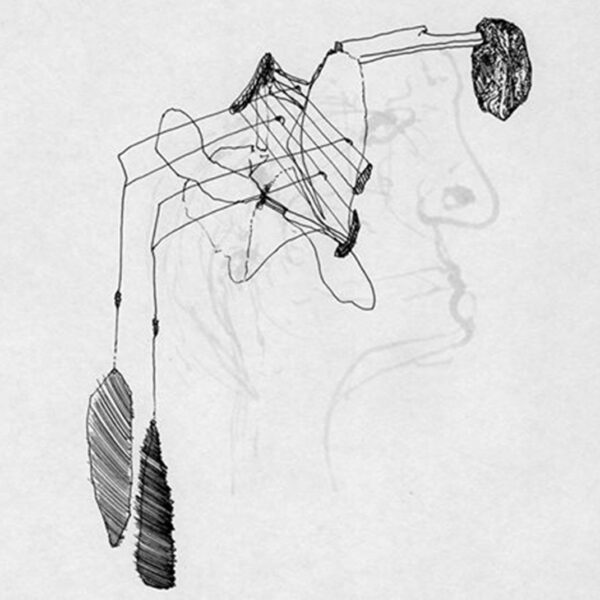 Another excellent organ record by Jean-Luc Guionnet, the French experimenter. This one is called Plugged Inclinations (CIRCUM-DISC-HELIX LX007 / BECOQ 23), it’s a live recording from 2013 made in Lille, and it features no fewer than 7 keyboards – electronic organs and harmoniums of various stripe and hue, including the coveted Hammond B3 with a Leslie cabinet, ever the weapon of choice for any serious progressive rock musician in the early 1970s. A single piece nearly 58 minutes in length, and a highly compelling textured and complex droner…

I recall we were very taken with Guionnet’s Pentes when it came out in 2002 and sent him a few brief questions. He had a very interesting view of what the organ meant to him as an instrument: “for me (in my poor head) organ is an archaic and sophisticated mix between piano (keyboard), mixing table (‘registres’- stops) and saxophone (pipes) which are the three instrumental accesses to sound I prefer…I did practice this instrument but less than on the saxophone or on the piano, and never in an academic way.” Keyboard, mixing desk, pipes…that was elaborate enough, but compare with how this apprehension of the organ has now evolved by the year 2016:

“1) we control a machine 2) the organ is halfway between vehicle and artificial intelligence : it is a public transport : a ship, a barque, a boat, a building within a building 3) passing the machinery to the filter of listening, gesture and architecture.” And that’s just the start of a long list of ideas. He’s still preoccupied with the mixing desk metaphor, only now its become something even more sophisticated; he calls it a “helpful member”, perhaps perceiving it as an extra helping hand or limb. He likens it to a “carburettor, distributor, central nervous system”, clearly sensing the possibility of a way to control, move and articulate something of considerable power. I like to think that on each of my favourite recorded organ solos, such as Sun Ra’s ‘Hiroshima’ or Keith Emerson and ‘Karn Evil 9’, the player is transformed for a moment into the megalomaniac Captain Nemo playing the organ on board the Nautilus. Here, Guionnet goes one better; the organ is the vessel itself, and he’s trying to steer it.

Listen to Plugged Inclinations with the above notions 1 in mind. At one level, you’ll notice it’s like listening to a machine, a steam-driven monster hissing and clanking along on its forward path with the inexorable march of a steam-roller or other industrial machine, flattening all. Somewhere he’s managing to lay bare the mechanics of the situation, exposing circuit boards, revealing pistons pumping and cogs turning. Jean-Luc Guionnet is not remotely interested in a smooth or seamless listening experience, and the rough edges are working well in his favour here. The other thing I like about it is the genuine sense of exploration; he’s not sure how these slightly-malfunctioning devices will perform, but he’s interested enough to keep pushing and keep discovering.

At a time when much of the excitement and unpredictability of experimental music seems to be dissipating in favour of quantifiable results, it’s a pleasure to get your mitts on a compelling piece of music like this. “The blast is endless,” reports Jean-Luc, attempting to account for the powerful force that fills his sails, “and the electric current is endless too. Neither the blast nor the current need me.” From 11 April 2016.