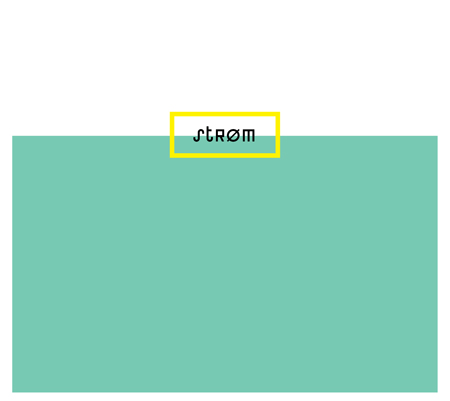 strøm is the superb duo of Swiss players Gaudenz Badrutt and Christian Müller. I thought we had in the past received some of their solo releases on the Swiss Domizil label, but I must have dreamed it. At any rate Gaudenz Badrutt has surfaced a few times, as part of the group Social Insects and with Jonas Kocher on a maddening record called Strategy Of Behaviour In Unexpected Situations. Plus he played with Kocher again in the Mayakovsky Library on Rotonda, where they were joined by Ilia Belorukov. This new record may be called X (MIKROTON CD 48) and is one of a crop of new excellent improv / sound art releases we received from the Russian Mikroton label.

Where Badrutt is all electronics here, Müller does some electronics but also plays the contrabass clarinet, the forbiddingly huge instrument which is the largest member of the clarinet family. On these six tracks, strøm are capable of creating a deliciously fractured and bitty approach to electronic noise, refusing any form of lushness or pleasant surface to the sounds, and accepting only the choicest moments of compressed digital glitch and crackle into the mix. Austerity and severity are just two of the watchwords hopefully sellotaped onto their respective consoles or mixing desks. This can result in very exciting music, where the listener’s fleshy brain and listening apparatus are draped over a stainless steel structure of some sort; there’s that much power and inflexible strength to the core.

Elsewhere, there is a menacing bass drone underpinning the work which may have originated from the clarinet. Oddly enough these moments are less satisfying for some reason, and I find I derive more satisfaction from the pieces which spit out their digital juices like so much hot fat over the roasting pan. Extremely abstract music, as reflected in the plain colourfield designs of the cover artworks. But this is very far from the clean lines of Raster-Noton or other minimal-glitch work of Cologne and Vienna, and its lineage does not come from techno beats or the dancefloor. From 14 April 2016.