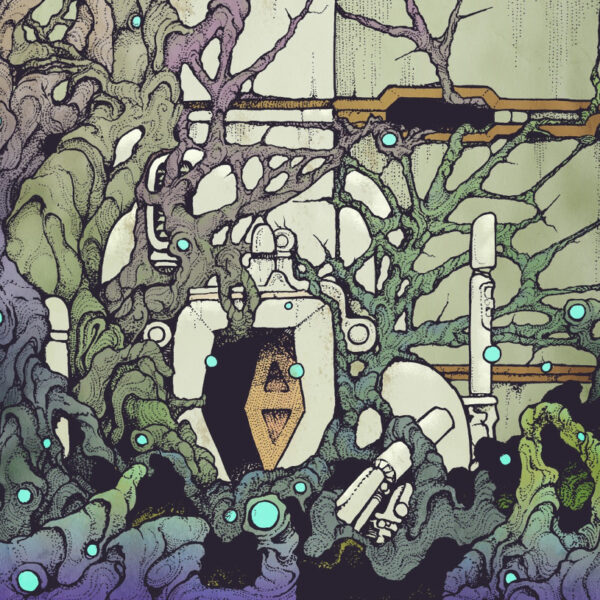 In the liner notes of a past album of theirs, Belfast-based Slomatics proclaim themselves middle-class professionals by day and aggro-sludge losers by night; on the strength of their most recent release “Future Echo Returns”, I wish that (at least in their corner of the UK anyway) there be more night, 24 hours of it in fact all … night long each day … or night. But that would probably require my part of the world, at the opposite end from where Slomatics reside, to be continuous daylight and I definitely would be most dissatisfied at being forced to be a middle-class professional myself 24/7.

One great thing about “Future Echo Returns” is that all the songs run from one into the next so that the album presents as a continuously flowing work that starts with thick crumbly doom metal riff slabs that transform into hard iron sludge and later into more atmospheric and mellow heavy rock, all of it with a strong psychedelic / sci-fi fantasy edge thanks to synth melody trimmings placed strategically around the heavy doom sluggernaut riff machine. At first the vocals, riding high on the doom beast, seem a bit lost – this music really suits a more guttural death metal vocal style but never mind – but they are clear and I don’t have the impression that the singing is fighting too hard for attention. Keyboards are used sparingly and to add atmospheric nuance to the grinding music.

An early highlight is the booming “In the Grip of Fausto” which brings in a hardcore edge in the shouty singing. With emphatic pounding martial drums and stentorian riffs that demand your full attention, this song might well become Slomatics’ anthem in years to come. After this track and the preceding two songs which crush all resistance to the doom sludge approach, the album takes an unexpected turn into airy silver mellowness with “Ritual Beginnings”, albeit with the same uncompromising attitude that never lets go of your senses but insists on absorbing them fully. The ambience is still alien and otherworldly thanks to swirling keyboard silver filigree tones.

“Rat Chariot” brings us back to serious ritual riff worship – and boy, are there plenty of stern riff structures to keep your ears and brains in thrall. The vocals can get a little strained and probably a more multi-tracked vocal approach or several different voices singing the “lord and master” chorus would have suited the song better. After this track the band stumbles a bit on “Supernothing” with ill-advised choirboy singing but the trio recovers for “Into the Eternal”, a long cruising piece taking in booming doom drone guitar tones, bleached-out ghost voices high in an acid sky and a wobbly background tone – a fitting journey into another plane of existence. Shrill solo lead guitar takes over high priest duties when the singing stops temporarily. The heavy doom procession pulls the congregation (meaning all you listening to the album) behind. None can resist following even when the music tails off into a lone bass coda.

On the whole this album is very strong, even with one weak(ish) track in its second half: while the Slomatics men love their doom metal sound and riffs, they also know that their sound and riffs deserve the very best songwriting skills and production. The result is a recording full of memorable songs that just seem to zip by in spite of their gastropod pace. The album is put together so well that it really flies like a breeze and each song shows evidence of care, thought and craft. Aggro-sludgenauts Slomatics may be but these fellas are definitely no losers!