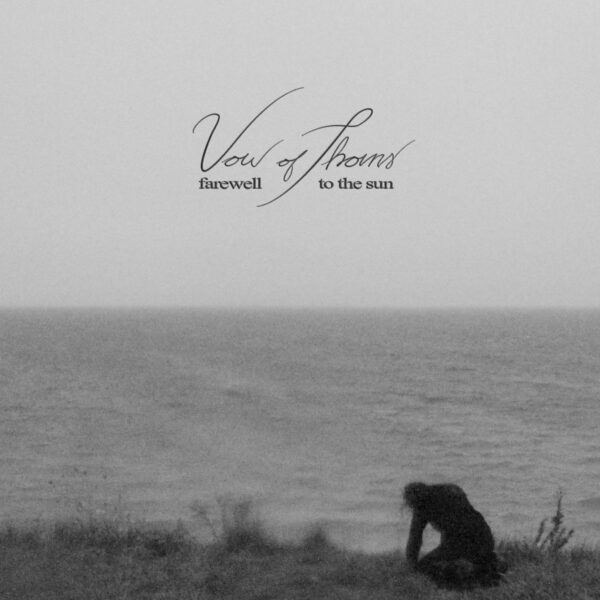 Although the foursome from southern Ontario have been playing together for some 8 years, Vow of Thorns haven’t had an impressive discography so far and only this year (2016) did they release their first album “Farewell to the Sun”. From the sound of it – and I’ve played it a few times already – I’m wondering if maybe even releasing it this year was a bit premature for VoT. There’s some very good atmospheric post-BM music here but taken as a whole the album lacks direction and focus, and much of it seems circular, repetitive and lacking in energy. I’m sure the members worked hard and long on this recording so I’m disappointed for them that it hasn’t turned out the way it could have done.

For a start there are three tracks that form a “Farewell to the Sun” trilogy within the album of the same name so listeners might query whether these songs, totalling 23 minutes altogether, couldn’t have been hived off as a separate album or EP release from the other tracks. For all that, there’s no great difference between those songs and the rest of the album, and the entire recording could have been an overarching work of six connected chapters. At least three tracks on the album, none of them related to one another, are 10+ minutes in length and listeners are hard-pressed to figure out why any one of these should be as long as it is, given that the music often wanders from one set of riffs or melodies to the next without anything being resolved within the song.

Opening track “Meeting on the Astral Plane” seems promising enough as it features some blistering BM energy mixed with passages of emotive doom filtered through a BM sheen along with some solid heavy metal melodic crunch and moments of quiet acoustic meditation within its 10-minute limit. The level of playing is solid throughout and the musicians pour their hearts and souls into the music. Can it be possible that they’re a bit too swept away by the music to the point of overplaying and the song ends up overstaying its welcome? There are moments where it seems there are other songs within “Meeting …” struggling to emerge and the musicians’ attention is diverted to indulging these within the original song and losing sight of what they should be doing. This is a problem that recurs on other tracks later, especially on the album’s other long songs.

You’d expect the “Farewell to the Sun” tracks to form a self-contained set in which a definite musical narrative can be heard. Part I at least starts off as a long instrumental intro. Part II takes up the baton and some of the musical themes but then starts falling apart during its fifth to sixth minutes with pauses that deflate the music’s momentum. From then on there’s a long, long haul back up to where we started. Perhaps the agony and anguish are intended but, jeez, the journey is excruciating. Part III similarly is an endurance test through doomy post-BM. At the end of this set, I don’t get the feeling that whatever crises were brought up during its 20-plus minutes have been resolved and what we’ve had to undergo is an extended wallow in depression and misery.

Much of the music actually isn’t bad, the album could have junked out a lot of the more repetitive sections and been a much tighter and more focused work. The production, while good, doesn’t serve the music too well, not allowing the more contemplative and atmospheric parts to be what they should be (that is, contemplative and atmospheric) or giving the heavier, more crunching riffs the three-dimensional solidity they need. The main problem is that too many songs try to pack too much in, trying to be all things to all people, and they end up sounding very similar.

For all that, VoT have some good melodies and riffs, and the guys play very well together; they just need better song composition skills and to reconsider how they want to sound and what they want to get out of it to provide a better experience for their fans.