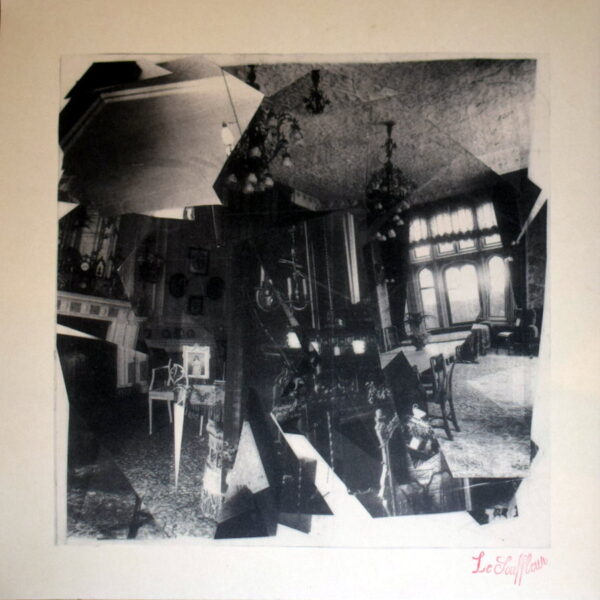 Here’s another new record by Raymond Dijkstra. At least I think it is. This vinyl LP is credited to Bhaavitaah Bhuutasthah, the music is credited to Le Ray, while the artworks and sleeve note are credited to RD. It’s fair to assume that these are all aliases for the same fellow; last time he descended upon our four walls, he was calling himself NIvRITTI MARGA, an act which he realised with the help of Timo van Luijk (from Noise-Maker’s Fifes) and Frédérique Bruyas, who added grisly voice effects. Unwritten rule followed by a few avant-garde acts: keep one step ahead of everyone by throwing them off the scent with exotic aliases. It worked for Fantômas, that pulp fiction anti-hero criminal mastermind so beloved of the Surrealists.

Over the years I keep finding myself in a love-hate relationship with Dijkstra’s work, forcing myself to hear it and drag myself to the writing block afterwards; even he was moved to email me with the observation, “although you don’t really seem to like my music, you’re nonetheless one of the best review writers I know.” Remembering In The Cosmic Manifestation (EDITIONS LE SOUFFLEUR LS111) is, for the first side at least, one of his more approachable records. The two parts of the title track appear on side one, and it’s a couple of moog / percussion workouts that I’d venture to say might even appeal to fans of the first Popol Vuh LP, Affenstunde. Matter of fact the very word “Cosmic” in the title is probably a nod in that very direction. But it’s far darker and colder than the sunlit worlds of Florian Fricke. It’s as though Florian had turned to diabolry and satanism instead of Tibetan Buddhism. I say this because the music is so wayward and distorted; although Le Ray comes close to playing recognisable chords or melodies, it’s as though he deliberately stops short of doing so, refusing that safe resolution into a comforting E-C-G chord shape. Likewise, his sonic treatments keep the listener off balance here; distortion, wayward interventions, and other devices to disrupt the surface calm keep on bobbing to the surface, like so many unwelcome monsters rising up from the bottom of the lake. Even those conga rhythms which could have added a transcendental effect and contributed to a meditative frame of mind are poisoned somehow; they smack of decadence, ether-infused trance states, unwholesome nightmares. So far, “approachable” does come with a caveat or two.

Side two turns out to be the hideous twin brother of the relatively benign side one. Both parts of ‘Kosmische Vernichtung’, especially the interminable part I, are the sort of indigestible and unsettling music I usually associate with Dijkstra. The title says as much. You may be cheered by the sight of the word “Kosmische” and assume we’re in for some more Popol Vuh related treats, but it translates as “cosmic destruction”, indicating at least three related aspects to Dijkstra’s fiendish plan. He aims to destroy krautrock music; he aims to completely reverse any benefit that may have been conferred by his efforts on side one; and he aims to create a soundtrack for the apocalypse. Yes, I know there’s probably not a single Industrial musician who hasn’t boasted about their apocalyptic ambitions since 1980 onwards, but Dijkstra comes pretty close to opening the Seventh Seal with this horrifying melange of sound he’s unleashed. Produced I think with mellotron added to the moog and percussion, said mellotron probably contributing the ultra-queasy string effect that sounds like a hundred classical musicians being sick at once, ‘Kosmische Vernichtung Part I’ manages to stay just on the right side of coherence long enough to pull you in to its hateful vortex of chaos and despair. Every discordant moment is probably planned and executed with a ruthless precision, the composer knowing exactly what buttons to push to induce existential terror in the listener’s head. You’ll think you can stand it at first, then after ten minutes you’ll be begging for mercy. I can’t really say I enjoyed listening to this side of swirling, monstrous noise, but it’s a work of genius. Evil genius, that is.

The cover art to this record continues the series of photo-collages we have already seen on Nivritti Marga and the Santasede 10-inch, also on this label and another Dijkstra collaborative project. Through the simple expedient of cutting up images of a lushly-furnished room, the artist strikes cold fear into the heart of the onlooker. It’s a deliberate attempt to subvert the normality of the bourgeoisie, through a direct attack on “good taste” and the traditions embodied in fabrics, wallpaper, and antiques. In the same way that the music challenges you to find a way into its illogical patterns and pathways, this impossible room looks at first sight like a place where a human being could enter, but the more you examine it the more you realise it’s an impossible, nightmare dimension, full of broken perspectives and awkward shapes. It’s not too far-fetched to suggest a connection could be found with the music on ‘Kosmische Vernichtung Part I’, those parts where classical orchestral traditions are being parodied and grotesquely mutated into a sickening noise. What these collages do for a hundred stately homes and luxury hotels across Europe, Dijkstra’s music is doing for the conventions of classical music. Once again I must liken him to that most famous of 20th century art movements, and consider him one of the most outright Surrealist artists working today. From 10th February 2016.