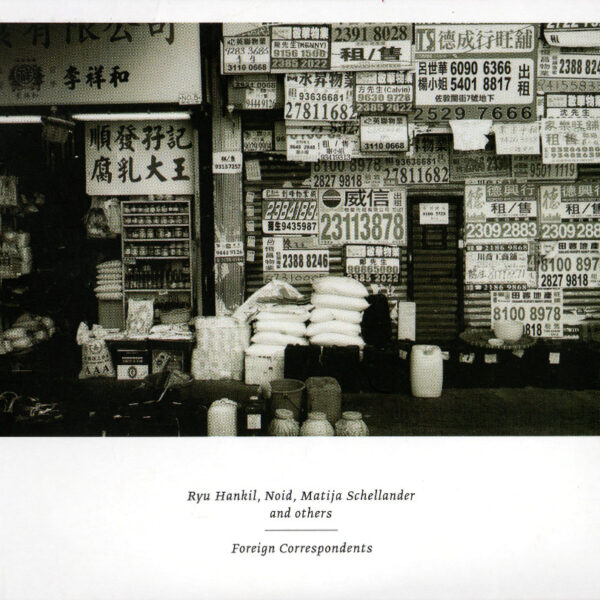 Foreign Correspondents is an unusual double CD of music and sound art which is highly intriguing…I thought it might be nice to investigate it “blind” without aid of search engine to begin with, as the information printed on this Russian release is not exactly forthcoming with contextual information. Rather, a few lines of bare facts is all we have to go on. On Disc One, there’s just a single stretch of music some 47 minutes long, which might be an improvisation between Hankil Ryu, Matija Schellander, and Noid. It’s called Tokyo Office and might well have been recorded in such a location, given that Ryu plays the typewriter as a percussion instrument. For starters, it’s reassuring to think there might still be typewriters in a world where everyone taps out digital messages on smartphone and tablet, freeing their trivial blather into the void. Ryu’s relentless hammering on that old-school analogue device is music to the ears of those who still cherish tangible messages written on a medium you can hold in your hands. Meanwhile Schellander plays the double bass and also emits buzzy explosions from something called a “Victorian synthesizer”, while Noid bows the cello and the jinghu, a Chinese bowed instrument whose wailing drones you may have heard if you’re an aficionado of the Peking opera. Their performance is an endearingly peculiar piece of acoustic improvisation, full of mysterious rattles and stabs, and equally puzzling tracts of silence. It was recorded at Ftarri in Tokyo in October 2013. Ftarri is not the deserted office block I was hoping for, and instead turns out to be a small shop and music venue, but I still can’t help hearing this piece as a document of an office cubicle take-over, performed by mutinous staff in the middle of the night, protesting against their restrictive lifestyles by means of forming an impromptu band playing pieces of office equipment. That’s a revolution we can all get behind.

Noid is the Austrian cellist Arnold Haberl, whose music we noted previously on another Mikroton release called I Hope It Doesn’t Work. He might be the pivot to this particular release as he is credited with recording and mixing the music, plus he appears on most of the pieces on the second disc, a collection entitled Field Report. From the same date range, Oct-Nov 2013, we have 23 tracks here on Field Report, interspersing improvised music with short snippets of field recordings captured in parts of urban Japan, China, and Korea. The latter include observations of Japanese city life which must have seemed intriguing to the European Noid; subway doors, traffic light signals, and a pachinko hall. But they also include such oddities as the machine drones heard in the staircase of the CIA building in Hong Kong, and a “fuel tank filled with sound art” (whatever that may be) in Shanghai. Some of the best field recordings can be given an extra dimension through such imaginative titles; the true poet should be looking for flashes of the divine wherever they poke their lyrical luminous nose.

These charming and understated field recordings convey a sense of peace and mystery, which is the exact opposite of what we might expect to find in these densely-populated parts of Asia such as Hong Kong, Seoul, Osaka, and Tokyo. Viewed through Noid’s audio snapshots, it’s as though the people, buildings and traffic have all been reduced by 75%, and the locations feel like some pre-war innocent paradise of birds, flowers, and contented spirits. The same sense of peace emerges from the extremely quiet improvised music on offer. It’s centred, tranquil. Hankil and Schellander are here again as the core members of this ad-hoc grouping, but also guest appearances – including notable Wandelweiser player Radu Malfatti, the guitarist Kazuhisa Ucihashi, Syo Yoshihama with a laptop, and Jin Sangtae. Most of the music is slow, unobtrusive, and with few notes; not only that, but it’s recorded in such a way that the acoustics feel very diffuse, and it’s hard to separate the sound of the instruments from the sound of the locale where it’s taking place. In this way, all of Field Report becomes of apiece, the edges blurred between music and sound art. This is most clearly demonstrated with the various instances of “street music”, where the musicians blend in with events, people and sounds out in the open; one track documents Noid and Schellander “playing air horns while walking away from Mullae Art Center”, while another piece from the same Dotolimpic Festival treats us to the sound of an entire orchestra performing on the “Victorian Synthesizer”, involving participants in a workshop. The results – less than 90 seconds of strange scraping sounds – are not quite as spectacular as that build-up may lead you to think, but what is more relevant here is the event itself, a spontaneous outbreak of sound and activity, a tiny wonder.

Foreign Correspondents is the document of Noid and Schellander’s 2013 trip to the Far East. It was planned they would meet musicians and exchange ideas… “carrying compositions, sound art pieces and workshop preparations in their luggage to be tested by changing social and artistic settings, by everyday tour life and to be used as starting points for debates in various forms,” as the label website describes it, and “exposing sometimes strict concepts to confusing listening situations”. As to this latter area, I think it’s this intoxicating mix of control and chaos that emanates from this CD. For most of the time it does so hesitantly, as befits the potentially bewildering situations that these roving Europeans found themselves in, out East. As for the “Victorian Synthesizer”, this appears to be an ongoing project by J.M Bowers since 2004 to build an electronic instrument using 19th century technology, and an “imagined historical reject” is what he calls the end result. We received a copy of this release on 14 April 2016, but it’s been out since 2015 and is sadly sold out at source.