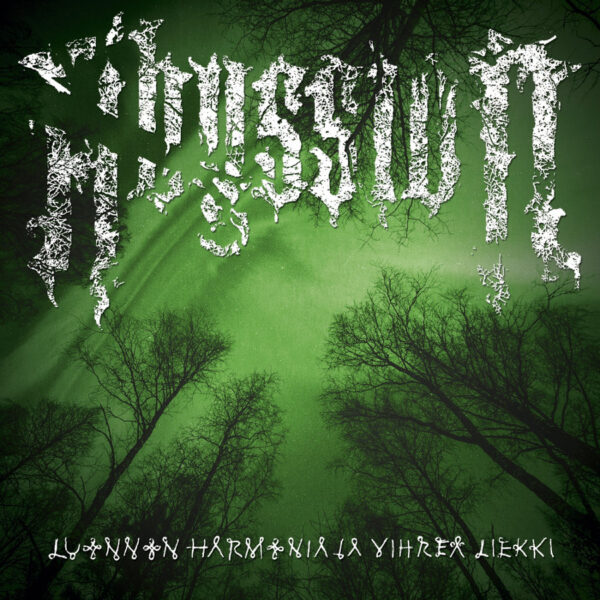 Apparently the album’s title translates into English as “The Harmony of Nature and the Green Flame” and the music bears a very superficial resemblance to Filosofem-period Burzum but there’s little about the album that’s either calming or pop-friendly for listeners. There’s a strong industrial / punk / garage feel to the music which through continuous tremolo micro-repetition and harsh abrasive guitar textures achieves an effect of ever-flowing levitating music which can have an unsettling impact on listeners. This feeling of being adrift is magnified by the use of synthesiser-generated cold space ambience and a severely raspy machine vocal reminiscent of Daleks gone psycho (for those of you who watch Doctor Who). It soon becomes obvious that, in the hands of Abyssion members Jose Rossi and Antti Varis, raw punky 1990s-period black metal becomes the launch-pad for sonic experimentation that takes the band and its followers into dark and deranged realms far beyond BM while still retaining a connection, however stretched out it becomes, to that genre.

Intro track “Luonnon Harmonia” sets the pace with a rock-n-roll rhythm, swirling psychedelic effects and a screeching vocal in what’s otherwise a no-nonsense throwback to old school BM. The drumming is close to overwhelming thunder on the second track but apart from that and the screaming, the music doesn’t raise its head much above a sedate pace until its last couple of moments. It’s not until we come to “Vihreä Liekki” that Abyssion comes close to the promise of the album’s opening track: demented demonic singing, a mix of fast and slow rhythms, psychedelic space-ambient effects that reach sky-high and dip down far below, a scrabbly lead guitar solo near the end, all of which are buoyed by solid tremolo guitar textures, combine to make the song a major highlight of the album.

Just when you think the band couldn’t be any more inspired after “Vihreä Liekki”, out comes “Ajatus kirkastuu” which experiments with droning guitar feedback and more atmospheric droning space psychedelia to create a cold, remote and sometimes nauseous mood, and which features even more insane shrieking vocals and thundering percussion. No matter how extreme this song (and some of the other songs on the album) becomes, the rhythm guitars still anchor everything in place with solid riff abrasion. The last track continues on, this time with some shrieky lead guitar soloing and furious stickwork, but it quickly runs out of puff and settles into a melodic BM groove.

For the first few times the album is a good listening experience with mostly short screechy songs and an inspired combination of raw punk, solid old school BM and cold space ambient psychedelic effects to spice up the music. After several repeated hearings though, you start to realise that the band is short on very catchy and memorable melodies and extended riffs, and that for all the vocal gymnastics the actual music doesn’t break into too much of a sweat. Perhaps sticking a bit too close to its black metal roots and not severing the connection with them and going into all-out blackened space derangement is Abyssion’s weak point here. Here’s a case where a band would seem to have everything going for it – but on closer inspection doesn’t have those inspired tunes that would take it far beyond the ends of the cosmos.