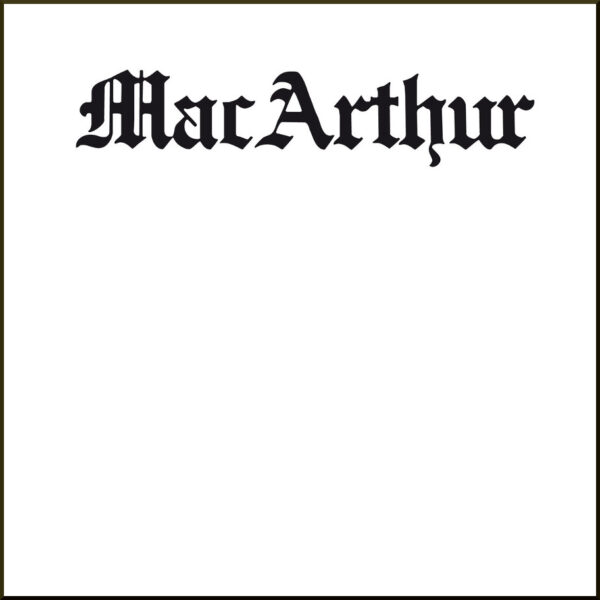 Here’s another reissue obscurity from Out-Sider Music, the Spanish offshoot of Guerssen, whose other offshoot Mental Experience brought us the reissues of Circles and Red Square. MacArthur (OSR044) was made by an American band in the late 1970s and described here as a “US basement psych-prog monster”. I understand why these reissue labels feel the need to hype everything they put out, but this is such a mediocre example of 1970s American rock that I find this hyperbole hard to swallow. Apart from some quite good flashes of accomplished lead guitar work, this whole album is an undistinguished piece of work, with lame songs, poor vocals, and a heavy-handed rhythm section.

MacArthur are sold to us as a form of progressive rock or psychedelic rock, but for the most part they resemble a third-rate version of Kansas, Boston, or Foghat. A charitable listener might find consonances between album opener ‘Light Up’ and the early work of Focus (it comes within an ace of turning into ‘Sylvia’), and ‘The Black Forest’ is a Flamenco-tinged instrumental that vaguely suggests sword-and-sorcery themes drawn from the well of Led Zeppelin IV. On ‘Prelude No 1 in C Major’, the guitarist indulges his skill for baroque classical guitar, and ‘The Shock Of The New’ is a showcase for ELP-styled pyrotechnics with speedy acoustic piano licks followed by Euro-prog moog solo excess. But MacArthur’s real passion is for playing power ballads, with unexceptional time signatures and unemotive vocals from the lead singer, and this material is what characterises most of the album. It’s quite some way from being “underground” as I would understand it; it seems more plausible that MacArthur had their sights set on finding their way into the AOR charts and FM radio play. Unfortunate timing for them, given that MTV was just about to dawn, resulting in significant changes to the market and audience they were seeking for their music.

The story of it is that MacArthur recorded the album at home in 1979, on a four-track machine. There are other, less credible, stories that say it was recorded in 1973 and released in 1974, but this is probably just wishful thinking. The creative nexus is songwriter Ben MacArthur and instrumentalist-arranger Bill Heffelfinger, who met in Saginaw in Michigan. Heffelfinger seems to be the main creative powerhouse; he arranged the songs and produced the album, the guitar and keyboard solos are all his, and so are what the press notes describe as “mini-moog analog synth attacks”.

The resulting album was a private-press release, comprising 200 copies (or 500; again, there are conflicting stories about this detail). It appeared in a very plain sleeve; the label is at pains to tell us the lengths they have gone to restore the “embossed letters” which appear on the LP version of this release, sparing no expense to represent the band’s original intention. Before this official release, there was a bootleg version circulating with a rather attractive collage cover, retitled The Black Forest, a release which may well have been the source of the wrong dates and other misinformation. Even that bootleg is rare, which persuades me that there are some vinyl collectors who will chase after anything provided it’s obscure enough, regardless of the quality of the music. Guerrsen and Out-Sider have been “reissuing rare and obscure psychedelic, progressive, folk and garage albums from the 60s to early 80s” now since 2010, arguably picking up the torch from other dubious labels who do likewise, such as Akarma, Radioactive Records, and Phoenix.

MacArthur is a very mixed bag and extremely uneven album which I can’t recommend, except as an odd period piece. From 16th April 2016.