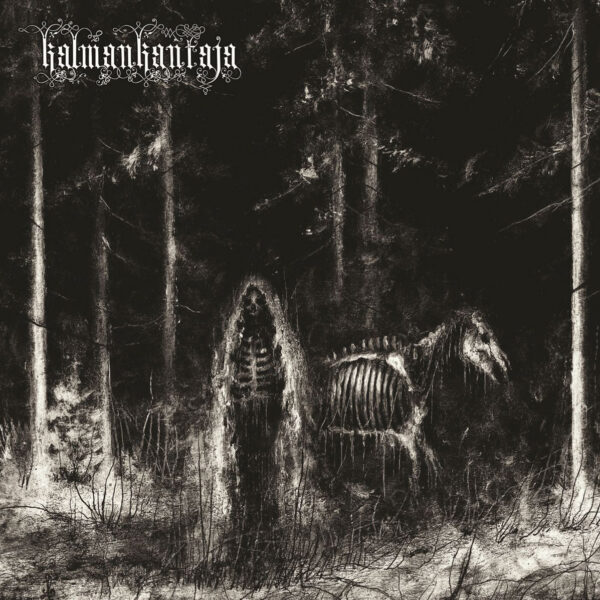 Since forming in 2011, Kalmankantaja have notched up an impressive discography (nine albums, two compilations, several EPs and splits) in the short time they’ve been together. I sometimes wonder whether they’d be better off recording fewer albums and splits each year and spending more time experimenting with and deviating from their style on the recordings they do make. “Tyhjyys”, the trio’s second full-length album for 2016, is a solid depressive BM work from start to finish but promises no new surprises for their fans. The musicians are progressing steadily from their original depressive BM approach to a more melodic and atmospheric style that straddles the underground and the alternative mainstream. The music is reminiscent of Burzum around his “Hvis Lyset Tar Oss” / “Filosofem” period but with a more powerful and spacey sound and less pop-oriented tunes.

All five songs are long with the shortest at least 8 minutes in length. “Iankaikkinen” sets the template for the rest of the album to follow: layered riffs with just enough distortion to project a hard, grinding texture (but not so much so that you can’t make them out), a pained synth tone-poem wash-over that sets the mood and gruff Finnish-language vocals that usually dominate the song. The drumming provides enough bang to anchor the music and occasionally stands out in parts but usually sticks to its time-keeping role. The riffs can be dramatic and sweeping, and lend an epic aspect to some tracks (as on the follow-up song “Mustat vedet”) though they’re not exactly whistle-worthy pop tunes. There’s a fair amount of repetition on most tracks which accounts for their length and probably if they’d been cut back by a minute or two each, not much would be lost in the way of the song’s integrity as instrumental passages within songs tend to go over and over the same riff.

While all the BM-oriented songs are consistent and powerful on their own, together they’re not that distinct from one another and they could interchange riffs and melodies without affecting the general downbeat mood and style much. The emotional level tends to be the same from one song to the next and the singing especially is more low-key than the songs perhaps deserve. The odd scream or demonic multi-voiced gabble-fest wouldn’t have hurt. Where songs build up to a climax, the cold mists of synthesiser tone wash tend to dampen down the intensity when maybe the guitars should just let rip once in a while with a volcanic boil-over. An opportunity to go into hypnotic psychedelic territory on “Yönpalvoja” offers itself but the band doesn’t take it up. Instead there’s too much repetition on this track and while it does have a lot of power, the song’s potential to be a stirring climax to everything that’s come before is wasted. Final track “Kaamos” is an all-ambient instrumental that does very little for its length.

Long-time Kalmankantaja fans will probably be happy that once again the band has been consistent and is continuing to produce technically good work but first-time listeners are probably better off hearing the trio’s shorter EP works or some of the split recordings the Finns have done with other bands.