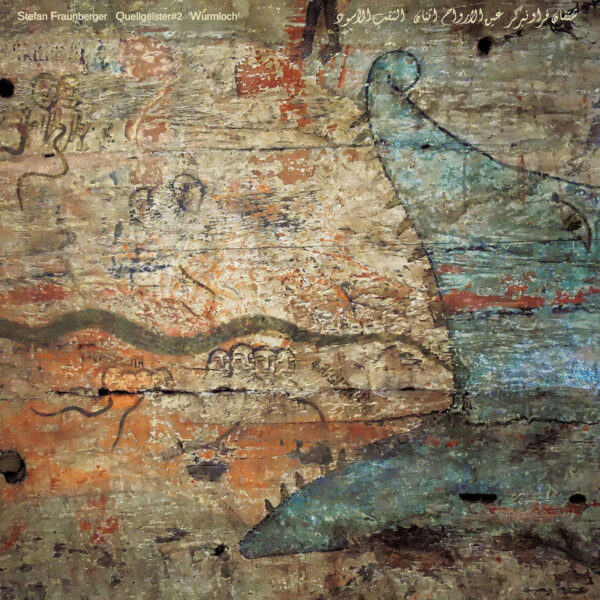 The Quellgeister #2: Wurmloch (INTERSTELLAR RECORDS INT039) LP by Austrian artist Stefan Fraunberger is part of his Quellgeister series…he does it by performing on “semi-ruined organs in deserted churches”. At one level what we hear is a fascinating wheezy acoustic drone, as he attempts to force sound from these old, broken devices. He’s not attempting to make music or play hymn tunes, rather create a conceptual form of sound art. The tones he creates are quite eerie, and the distressed keys and dilapidated pipes are clearly generating just the sort of effects he’s seeking. Even the performances are “broken”, refusing conventional form and veering from recognisable modular chords to freely-improvised passages and moments of purely abstract noise. So far, very rewarding and highly unusual set of rather disconcerting half-musical sounds emerge from Wurmloch, and we could probably locate Fraunberger in a lineage with other artists who discover ruined pianos in odd places and try and force a noise out of them, such as Russ Bolleter or Annea Lockwood.

Stefan Fraunberger is doing it in Transylvania, in churches that are about 300 years old. One of the things that interests him is the profound changes history and migration has wrought in this area, whose German population have mostly moved on since the collapse of the Berlin wall, and where the small villages are now inhabited by Sinti and Romani gypsies. The churches he visits were built during one of the many Ottoman wars, and are more like fortresses. Fraunberger sees the buildings, and the organs themselves, as the last surviving remnant of a forgotten purpose, a “pre-modern, forgotten future” as the press notes have it. He proposes to reinhabit and colonise this admittedly rather vague zone with his own modern, radical ideas, through the possibilities of sound…the record is a document of his spontaneously created “organic sculptures”. While “organic” is an overused word in our field, it’s entirely appropriate to the all-acoustic nature of this sound art, music which is somehow aspiring to reach the “abstracted spirit of electronic music”. Not just because it involves wood and other natural materials and the passage of air wheezing its way through the pipes in irregular bursts, but something of the rottenness and decay of the organ itself has passed onto the grooves. You can almost see the dust, smell the mould.

Visit Franunberger’s website for further examples of his forward-looking and rather abstruse ideas about art and language, and its place in society…through his extensive travels, he seems to be trying to discover things about the meaning of contemporary culture through signs of change and decay, and finding clues in the most unlikely places. The photo of heavily-rusted satellite dishes is strangely evocative in that context, for reasons I can’t explain. From 3 May 2016.