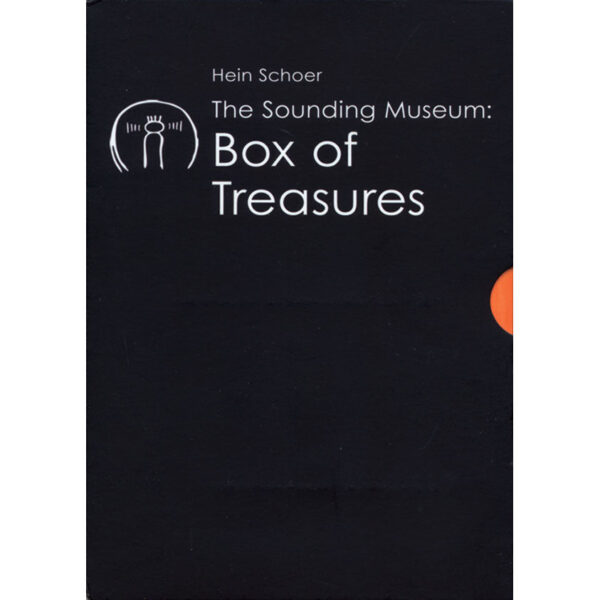 Talk about getting what you wish for. The Sounding Museum: Box of Treasures could have been assembled and (re)issued in direct response to Jennifer Hor’s review of ‘soundscaper’ Hein Schoer’s original in 2012, CD-only edition of The Sounding Museum: Two Weeks in Alert Bay in the Sound Projector in 2012. The CD contained field recordings of the mountainous ‘Namgis region of Western Canada along with documentation of the aboriginal inhabitants’ oral tradition of songs and stories; the two being contextually inseparable. Yet the disc proved unsatisfying and incomplete to some listeners, owing to a lack of background detail, though whether or not this effect was by design is unclear. However, Jennifer’s dissatisfaction with this under-represented subject matter – and potentially extending to other ethnographic documents – was qualified by a recommendation for accompanying DVD and map of the area in question.

It appears that the walls sometimes have ears, as the Gruenrekorder label have gone even further in their appeasement gesture than hoped for, packaging an extended CD, audio and visual DVDs with a 400-page book detailing Schoer’s motives for and experiences during his two weeks spent among the small Namgis community, a name doubtless quite new to most readers of these words. To leave no stone unturned is one reason for this disambiguation, and to ensure no remaining uncertainty as to the fact that it represents an outsider’s superficial overview, another. The explicit honesty behind this disclaimer offers more than the safety of academic distance: the music is intended to stir interest and imagination and to spur the curious listener to invest time in personal research via the book and discs, including an audio DVD designed for nothing less than quadraphonic playback of the full contents of the original CD, which further underlines the book’s similarly immersive role in this set.

One problem highlighted by the above review is the lack of background information about the life and culture of the people of Alert Bay, though this deficit may in fact have been by design: Schoer provides an account of the project’s development, which early on included preparing a permanent exhibition in a museum in Zurich; one of sound without visuals. ‘We believed that the experience of the sounds of a culture brings an immediacy and intimacy, an immersive quality, that the usual object-focussed approach of the classical exhibition was lacking’ he explains.

Such an approach illustrates the evident challenge when translating to a saturated CD marketplace though: who wants to buy a blank package? The problem is more than adequately handled by the second DVD though, which contains an unexpurgated ‘directors cut’ cornucopia of photos, videos, original recordings, an interactive map and related documentation should anyone have the time and commitment to plumbing the depths of this comprehensive effort. The feast of photography is particularly fascinating, illuminating pastimes, wildlife and local landscapes less than half-defined by the recordings. Schoer recommends sifting through all this only after listening to the main recording.

Musically, both much and little has changed to the contents of the initial release, that is, the title piece ‘Two Weeks…’. This 42-minute audio montage weaves environmental sounds into recordings of the culture and customs of the ‘Namgis: traditional songs, percussion performances, carving workshops and what could be story-telling (or merely gossip) in the indigenous language, though there are snatches of explanatory English. Weaving together uneventfully quotidian events to rather rousing musical passages, Schoer’s intention for this exposition seems to be would appear to be a blend of authenticity with the sensational, resulting in a kind of magical realism; a wallpaper that repeatedly draws you in from the cold with its bamboozling intricacy. While I personally find many of the supplementary recordings interesting, their appeal certainly owes a great deal to this piece. My one regret is that I haven’t the facilities to enjoy the more immersive DVD audio version.

Appended to this are some original songs and a verbal account of a local myth in which U’melth – a promethean raven – connives to steal the sun; a fable that held parallel for Jennifer to the work of the soundscaper/field recorder. The telling is richly descriptive, but requires careful attention, unlike the title piece. However, all of this is framed by what is explicitly Schoer’s perspective: the ‘journey’ begins and ends with recordings of the ferry trip to and from the Alert Bay, the first an echoing and relatively lunar experience, the latter a rich, dream-like accumulation of audio memories that follow the recordist home.

The thoroughness with which this package has been compiled soundly addresses any possible charge of paucity, yet it also highlights the difficulties implicit in purveying ethnographic recordings. Many labels recognise this reality, and present their recordings with a necessary minimum of supplementary material. By offering this remarkable and heavily annotated second edition to Schoer’s original soundscape, Gruenrekorder make the point that such endeavours are by necessity an all or nothing affair, and – moreover – that the listener has a responsibility to take an active role in the process.