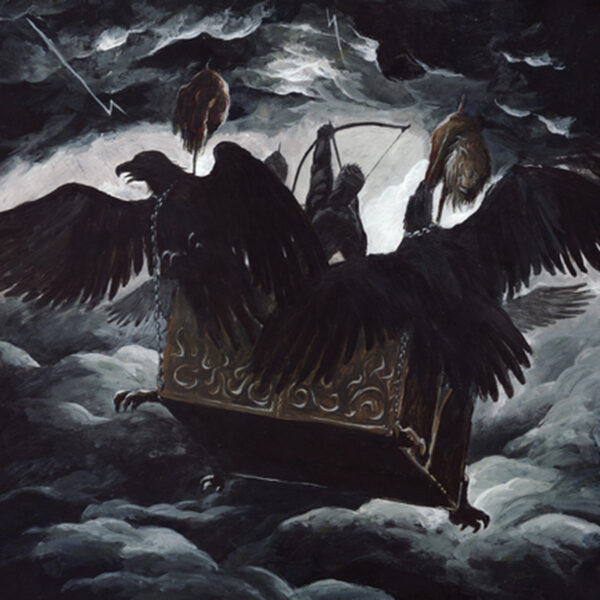 After a 6-year break during which DSO fans had to be content with compilations, boxed sets and short EPs, the mighty French legends finally release a new album which turns out to be not that much longer than the short EP releases. Those of us hoping for something innovative from the band that was evident on the last original work “Drought” will be a bit disappointed too – the atmosphere and dark moods and spaces on that EP have gone and in their place is what we know to be DSO’s usual style of highly technical and sharp twisting-and-turning dense black / death metal. As is the custom of DSO, there are usually just two modes of musical delivery: the fast and furious careening along at breakneck speed that continually throws listeners off balance; and the short micro-breaks between one such episode and the next such episode.

“The Synarchy of Molten Bones” might be DSO in default cruise mode, and I’m a bit disappointed that the music here is no advance on their last release, but most DSO fans who’ve been starved for new music will be happy just to know their heroes can still deliver powerful and intense venomous black metal. The music is still dense and spiky in that dark sparkling jewelled dissonant-tone way, and there’s still that deranged edge to the playing and the ravaged multi-demon voices that dominate all four songs. The lyrics proclaim a new humanity arising from the remains of the old, but this time in the image of Satan, with all that is implied in that idea. Satan is still at heart a trickster and dissembler and a humanity in his image might partake of his deceptive nature and be no better than the humans that have gone before. Like other DSO releases, this one is so intense, overwhelming in its densely layered music and esoteric lyrics, that most fans will need several hearings to absorb it all. Though the distorted sound is still familiar, the production is still clean enough that a cold airy background ambience, through which choirs can be heard sighing, makes its presence felt through the flippy blast-beat percussion, the noodling guitars and the demon voices as they fade in and out and blend with one another.

There isn’t much to distinguish the four tracks from one another except perhaps that each succeeding track is more insane and frantic than the one before. DSO really play like men possessed and if all DSO albums were to be judged purely on their levels of madness and demented intensity, “The Synarchy …” would rate very high. The drumming especially has a deranged life of its own and I think it’s a pity the actual beats have such a thin brittle quality and don’t have the power they could have. Indeed the thin production here doesn’t do DSO much justice – the music needs to be deeper to bring out the band’s fanatical side.

Even so, there’s plenty of substance in the lyrics that will intrigue listeners and which might ensure that the album, for all its immediate musical faults, will grow on listeners and be considered essential listening, warts and all.