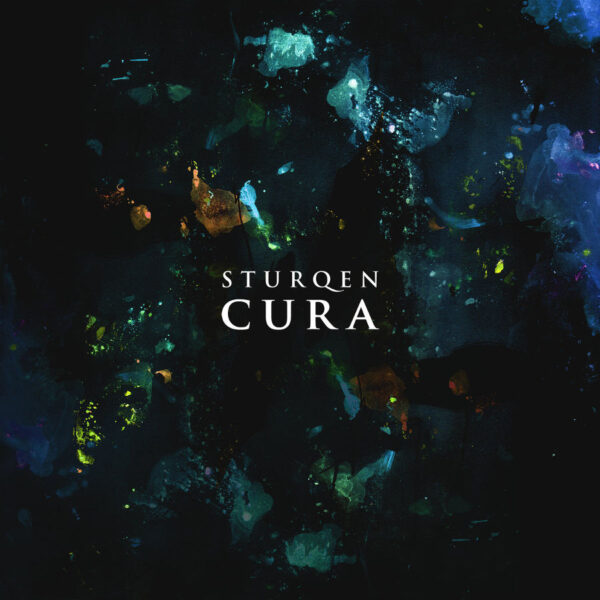 Last heard from Sturqen in 2012 with their Praga album for Kvitnu, the label that loves all things heavy and dense…the Portuguese duo of Cesar Rodrigues and David Arantes have been active since 2008 and continue to carve their own furrow in the swirling world of dark techno-mechanical blackness. Their Cura (KVITNU 45) shows they are still preoccupied with machines and their work remains themed on the idea of industrial mayhem, described here as a “journey through grimy machines”…consequently, a black and airless world is what they create, with remorseless hammering drum beats sucking up the air and the only relief to our plight is offered by electronic devices and synths occasionally treated to resemble the howl of an electric guitar.

Cura is also a “concept album” of sorts; the title means “cure” in English and an enclosed note muses on the idea of what modern medicine can really offer us by way of effective treatment, perhaps thinking of such aggressive techniques as chemo-therapy to cure cancer. Sturqen propose a radical alternative to mainstream medicine with their music, calling it a “negation of the negation that suppressed that which is strange to a healthy system”, and offer the album to the world as “an act of healthy violence”. Presumably this is all a metaphor. I don’t think they seriously intend Cura to be played henceforth in hospitals everywhere over the PA system, thus causing ill patients to leap from their beds instantly, but their argument has not been fully thought through. It seems simply to be a rather solemn and over-elaborate way of saying “take it or leave it” when you hear their music.

This aside, there is a lot to enjoy on Cura, and I like the stern and unblinking qualities the pair are capable of unleashing, even though their sounds are not quite as dark and violent as they evidently seem to think. From 8th June 2016.