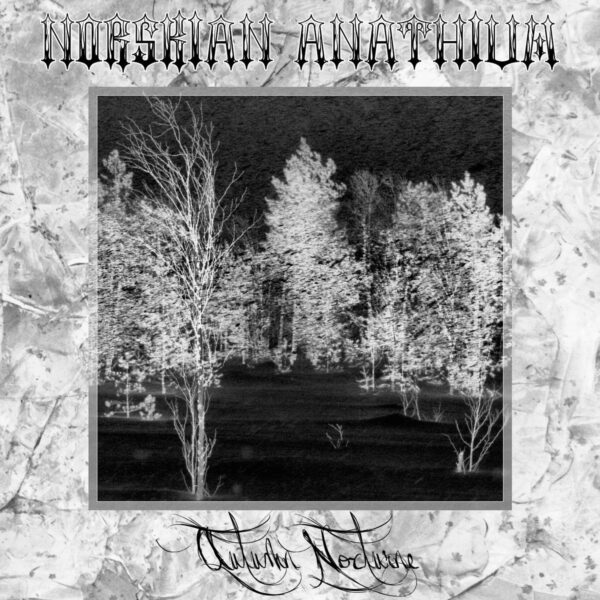 From Ekaterinburg in Siberia come Norskian Anathium with their debut album and first release that isn’t self-titled. The duo delivers a very mournful and despairing quartet of songs on death and melancholy. The band composes in Russian but the vocals are very distorted and have a distant phantom-like sound so listeners outside Russia can treat these as an extra layer of ambient sonic texture.

After a plaintive piano-dominated introduction, these guys throw you into the business end of their depressive BM with powerful and surging BM grind-guitar, flippy percussion and some of the most ghostly vocals to be found east of the Ural mountains in “September – Into the Ice Fog”. (Well, not that I know very much of Siberia beyond the Urals.) For such pained and painful music, filled with angst and inner torment, there’s plenty of hate, fire and energy pushing the song along. A strong bass groove in parts, distinct riffs and heart-breaking screams from afar keep the interest level high through the song’s long duration. While the guitar tones are chainsaw-rough, the production is clean and sharp enough that the bass melodies can be heard beneath the layered music and the vocals have a very cold edge. Enough repetition of particular riffs throughout the song maintains its focus and keeps it distinct from other tracks on the album.

“October – Thunderstorm”, played in a different key, has a more familiar sound for those of us who remember Burzum’s classic “Filosofem” album. The mood is dark with rock-solid bass chord drones and busy tremolo guitars sounding warning siren riffs. The voices wail more, verging on the deranged, though there is hate behind them. The highlight of this song is the hyperactive percussion meltdown in the song’s second half along with the sonorous bass slash riffs. Outro track “November – Sinister Moon” doesn’t differ greatly from the preceding tracks but ramps up the emotional intensity in the vocals and in the repetitive riffing and relentless drive of the music.

While Norskian Anathium could probably strive for a more distinctive sound, they deliver a highly emotional recording of sheer unrelenting pain and anguish, energy and the feeling of rushing towards the abyss. The music really seems to have a life of its own; the two musicians become mere conduits bringing forth a message from the spirit world about the meaninglessness and despair of life, and how death may not necessarily be a comfort from suffering. The vocals are certainly very dramatic and there’s a fine balance between drama and theatrical histrionics being trod here.

Where the album falters is in the last few moments of the final track where it appears there’s no climax followed by an easing of tension but the recording simply going on and on in its fade-out. That probably makes sense in the context of the album and the duo’s aims but for listeners it’s a very uneasy finish. There’s something about that conclusion that suggests “cliffhanger” and that there’s more to come from these guys … I certainly hope so if they can maintain the standard they’ve set here.