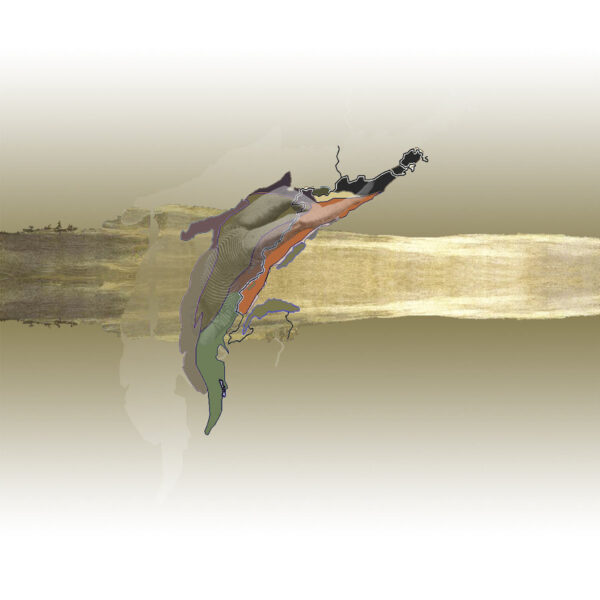 French genius eRikm is here again with another of his modernist compositions, the conceptual suite of electro-acoustic music Doubse Hysterie (MONOTYPE RECORDS MONO076). I’ve usually enjoyed his turntabling and sampling actions more than his formal composed music; the latter generally strikes me as cold, stiff and laboured, compared to the fun-loving pyrotechnics of the former. This Doubse Hysterie is an interesting one, however, and offers a variety of approaches across its six movements: lengthy and highly extended digital drones, mostly produced by a form of time-stretching which is eminently possible using today’s editing tools; musical performances, from the string duo of Julia Eckhardt and Silvia Platzer on ‘Hallali’; and a solo Khen performance from eRikm on ‘Bout De Souffle’. The record takes the listener on a train journey, and speculates on the meaning of male hysteria via the works of Freud and a sculpture by Louise Bourgeois.

The time-stretching method is most evident on the interminable ‘Argentique’, which performs the impossible feat of extending a church bell chime for about 16 minutes; the semi-natural drone created extends into the distance, inviting gloomy prognostications. A bell of finality, tolling for the doom of man. ‘Arcus’ and ‘Cirrus’ may be working in similar ways, but at least they’re more maximal and there’s more substance in the sound to cling onto, even though the latter is in danger of lapsing into commonplace sound-file manipulation and over-familiar digital crunch. ‘Hallali’ continues to stand out on today’s spin, maybe because of the icy precision of the string players, or simply because of the resigned melancholy of its emotional stance. ‘Pop Macalogique’ is good too, and may come the closest to realising the composer’s intent, offering a suitable sombre tone for us to enjoy its grandiose, near-orchestral sweep.

As to that intent, Doubse Hysterie appears to have evolved in eRikm’s noggin through a mixture of process and ideas, one inspiring the other. Erikm took a train journey in the Franche-Comte area and, like many passengers these days, listened to stuff on his smartphone. As he would have it, this was “immersive listening” with “audio headphones”, and the fact that the smartphone has a GPS feature is also part of the concept in some way. Not unrelated is eRikm’s practice of taking long-exposure photographs out of the window when he rides the train, resulting in images which he calls “horizontally striated periodicities” 1. One example of these may even feature on the cover here. We can see the parallel between that method of image creation and the music on the CD; at one level, it shows the possibilities of manipulation of digital data, be it for image or audio.

Originally commissioned in 2011 by the Intermèdes Géographiques association, Doubse Hysterie contains nine suites in its full form; eRikm has carefully selected six of them, to create an album length piece and something suitable for home consumption, implying that the actual concert-hall performance was of a much more ambitious order. When he looked deeper into the ecological environment of the Arc Jurassien (through which his train journey took him), his mind made a connection between this geological arc and Arc D’Hysterie, a sculpture by Louise Bourgeois; this chain of thought leads us to one possible conclusion that Doubse Hysterie is “about” the phenomenon of male hysteria. I’m not overly familiar with this psychological condition, but there’s one school of thought that suggests it’s a real thing that is often over-shadowed by its female counterpoint; even eRikm thinks it is “almost unknown and remains a taboo”. Odd; he seems to stand on the cusp of becoming an advocate for hysteria, reclaiming it as a men’s lifestyle option. Maybe he could make it into a political platform.

Decide for yourself how much of this intellectual content has passed into the music; you may not find any nerve-shredding panic-attack mode music, if that’s what you were expecting, but that might not be the point. The central image on the cover could almost be mistaken for a highly stylised human figure writhing in agony during such an attack, but in fact it’s a map of the Arc Jurassien. From 21 June 2016.