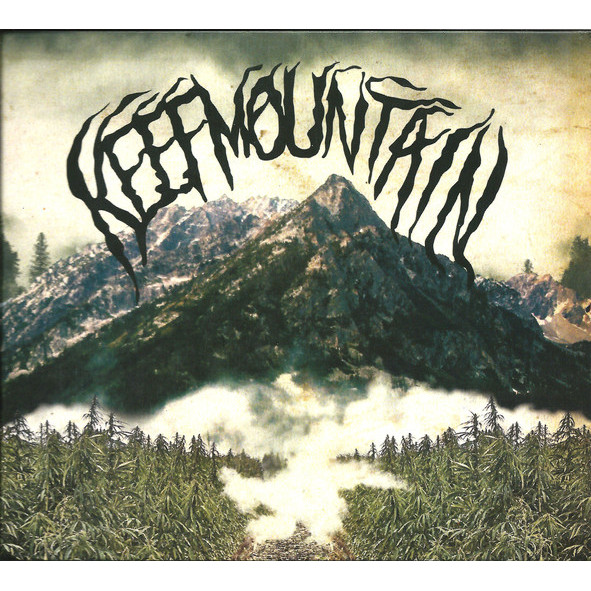 Hard to believe that this is Keef Mountain’s debut album and all the music is the work of just two musicians: this is really massive and powerful, a very confident and self-assured recording with a definite message that celebrates transcendence and the various modes of achieving it. The band manages to be retro-1970s stoner doom in style and sheer heaviness yet the music sounds fresh and up-to-date due to a good balance between a distorted fuzzy guitar sound and a clean production that gives the songs a minimal and spacious quality. The songs are short and straight to the point in their delivery, with strong tough riffing that defines the tracks’ identities. While the singing is shouty, it’s very clear and isn’t overwhelmed by the music.

Opener “Green Wizard” might clock under five minutes but it has three quite distinct parts: a slow instrumental introduction followed by a speedy middle section where the best riffs and singing are bunched together, and a silly finale featuring a spoken-word recording about the worth of taking drugs over organised religion. Fortunately the found sound recording is the only hokey part of the album so if listeners can hang on, they’ll be well rewarded. “Psilocybin Queen” is a better indicator of what listeners can expect: focused songs stressing good solid doom riffing, plenty of jamming and no unnecessary meandering or filler material. If anything, the songs could afford to be a bit longer so listeners can savour the more doomy and abrasive rhythm guitar crunching – some of those riffs are sledgehammer- heavy – or the more spaced-out trippy ambient parts where they exist.

Surprisingly the album’s best moments come after the halfway point when we think the band can’t possibly keep up the standard anymore and we start expecting the inevitable slide into filler-zone territory: “Resin Lung” introduces a light psychedelic or sci-fi influence with treated vocal leading into a frenzy of bass grind riffing. “Hendog” is much slower and sludgier with eerily treated vocals that sound as if their owner was stuck in a space capsule high above Earth; the song later collapses into a series of powerful crashing riffs. “Higher Realms” is a gritty and sometimes darkly brooding resolution of the album’s themes and ideas in just over six compact minutes.

All the songs are good as they are, though they probably could do with more atmosphere than they have, and different atmospheres at that so they are more distinctive from one another. Keef Mountain have a powerful and bass-heavy style that could be even more so if they let fly on longer songs with more instrumental and improvised music. I’d be keen on the duo following up with a longer  album with themes and ideas going beyond dope-smoking and rituals of transcendence – these guys seem more than capable of taking their listeners on long extended journeys through vistas of inner time and space.