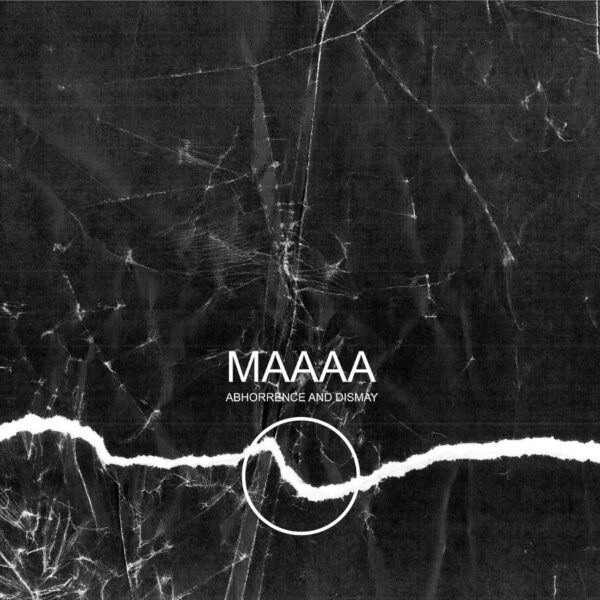 We’ve had a soft spot (assuming you can indeed experience such an emotion when it comes to harsh noise records) for the music of MAAAA since 2011, a time when we heard their Decay And Demoralization record for Mind Flare Media, and also a superb split they made with K2 for Triangle Records. For the longest time I have since assumed that MAAAA is a husband and wife duo and always liked the idea of them being two committed noise-makers who “live the life” to the max with a disciplined, straight-edge lifestyle. I’ve also been less than clear about the Russian-Polish origins of the band. A little fact-checking reveals that, at time of writing, MAAA is the solo project of Sergei Hanolainen, a Russian-born fellow who lives in Warsaw in Poland. The group is about ten years old, used to be a “punk noise collective”, and in fact had ten members in its ranks at one point. Sergei also came our way in 2015, when he co-curated the superb comp. Hard Panning for Triangle Records, on which MAAAA appeared with ‘Utmost Restraint’, enjoyed by this writer as a “liquid firework display”… “propelled forward as surely as a gigantic ball of dung rolled by two dung-beetles”.

We now have Abhorrence And Dismay (TRIANGLE RECORDS TR-55), which appears to be the first release by MAAAA since that K2 split mentioned above; continuing the theme of Decay And Demoralization, it’s clear that Sergei sees evil inhabiting the world in twin pairs of horror at all times. The music here was created by a mix of “decaying tape loop manipulation, amplified objects, field recordings and torn harsh noise passages.” These two long tracks express his personal revulsion at the grotesqueries of human life and the filthy globe. The first of these, ‘Abhorrence’, may finish up a sub-Merzbow roar of painful harsh noise wall, but before it reaches that point it stumbles its way blindly over some fascinating sonic terrain; the listener is led through several strange moods and bizarre textures, there are plenty of dramatic shifts and changes, and the dynamics of the music are just plain odd. I recently re-listened to Merzbow’s Collapse 12 Floors and was similarly struck by the careful attention to bizarre shifts of timbre and tone, where the sheer unexpectedness of the changes draws many a gasp from the lungs. MAAAA is not far away from achieving the same powerful sensations here.

The same drama can be found on ‘Dismay’, a superb construct full of similar contrasts and stark, evil sonorities battling it out in a disputed no-man’s-land of noisy turf. If he were a visual painter, MAAAA would most likely favour fields of all-black jagged edge colour fields, thrown to create vivid contrasts with white paint and unprimed canvas, an angrified update on Franz Kline. ‘Dismay’ also seems to link back to industrial music of the 1980s, and perhaps to the work of the ultimate Polish gloomoid noise genius, Zbigniew Karkowski; I can sense a similar preoccupation with remorsless, airless, sound, and an attempt to delineate the horrors of the grim Polish political-scape using electronic noise. With this release, Sergei Hanolainen has created a nuanced and detailed work fit to be regarded as a modernist compositional statement, and not just another harsh noise record. From 6th June 2016.