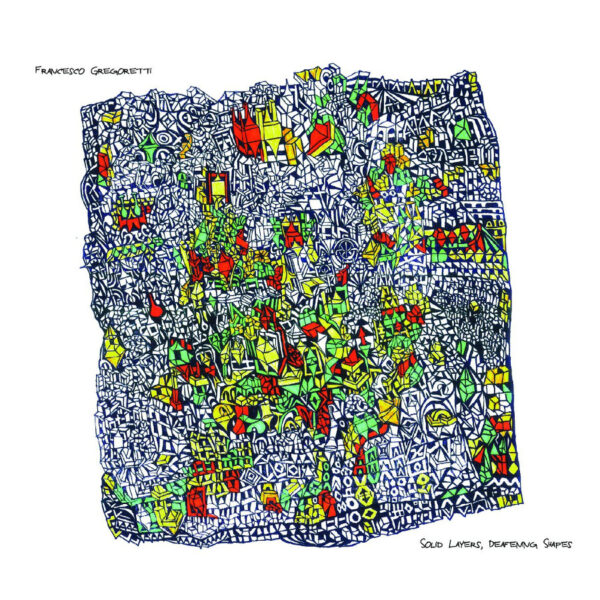 We’ve heard Francesco Gregoretti before as part of the group Strongly Imploded, an unusual Italian improv combo; their ranks also include the wonderful _SEC, who did the mastering for Solid Layers, Deafening Shapes (TOXO RECORDS TX06) which is Gregoretti’s solo percussion album. Gregoretti is what we might call an “expanded” or “augmented” drummer. Not settling for the classical drum set, he also plays objects and amplification, thus placing himself in a line of avant-percussionists that surely must include Chris Cutler in the 1980s.

His set-up is described as a “system” here in the press notes, and I can well believe it…his aim is to generate “personal sound worlds”, and the overall effect of Solid Layers is indeed something that surrounds and immerses the listener. Instead of being attacked by percussive stabs and bites like a swarm of hornets, we’re boxed in with heavy blocks of droning, groaning, sub-bass roars and grunts. No wonder ‘Uproar Among The Gods’ is one of his track titles; that track in particular is a portrait of an Olympian rumble, like the opening track to Hendrix’s Electric Ladyland rethought for amplified drums. Matter of fact ‘Uproar Among The Gods’ would make a good title for a Led Zep bio depicting arguments and disagreements within the band. Gregoretti is also pretty hot with bowed cymbals and other metallic moments, which vary and leaven the otherwise “blocky” sensations of this sweaty, 12-rounds with the heavyweight champ album.

SEC_ has also written a sleeve note for the record, in which he points out that Gregoretti is a mathematician, and speculates on the way his music tends to demonstrate the rules of chaos theory. I also find that Gregoretti has played with some of my favourite maverick improvisers, including fellow mad drummer Will Guthrie, Jean-Marc Foussat the Algerian king of the VCS3, and Japanese guitar maestro TeTuzi Akiyama. You can judge a drummer by the company he keeps, they say. I also learn that the group Strongly Imploded is but one offshoot of the mothership group Grizzly Imploded, which has also spawned another combo called Oddly Imploded. I can’t keep up. From 26 June 2016.