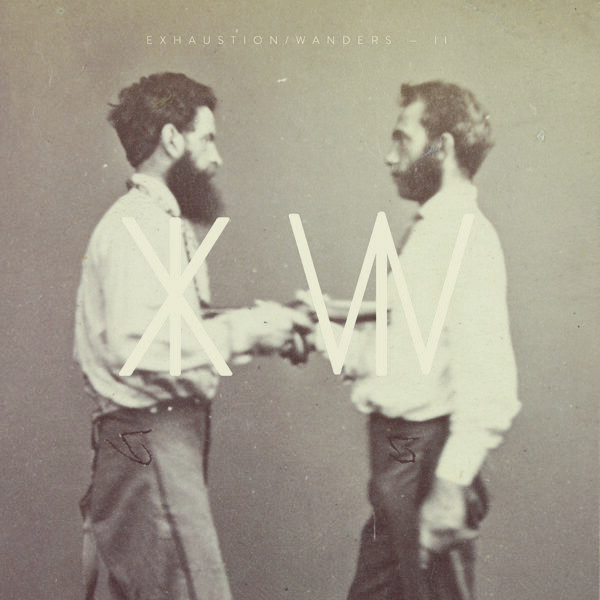 Exhaustion / Wanders is a meaty and maximal improvising combo who I never heard before, but am prepared to grant them “access all areas” and a full amnesty based on today’s spin of II (FEEDING TUBE RECORDS FTR238). We might observe that sweat drips from them like mercury rolling off a mirror, but it’s a cold sweat. They manifest seething energy, yet also lurch and broil in a strange stagnant quagmire of noise. They have a very natural approach to generating powerful dynamics and changes, yet also relish the opportunity to keep stating the same proposal over and over until we admit defeat. There’s a lot of tensions and paradoxes, though that first might be the main one.

Kris Wanders is the sax player, perhaps guesting on this sesh, as he has on another record with the avant-rock trio. I noticed on side two, called ‘A Vicious Indulgence’, he began the set screaming and honking in a very free mode, like a super-face proponent of the Albert Ayler school of fish. The bassist Ian Wadley and the drummer Per Byström were prepared to act like an Ornette rhythm section for as long as needed, so those three seemed to share some common ground. But the guitarist, the mad Duncan Blanchford, was on another planet, a cold and slow planet with very heavy gravity. His grim and purposeful sawing motions with that grey, metallic axe were at total odds with the speedier parts of the music. A lot to listen to, and a lot of tension. ‘A Vicious Indulgence’ subsides at last into a mysterious temperate zone, demonstrating that effortless way that E/W – they use a strange runic combination to denote their identity – can control the flux and flow of the music, swooping from clean air mountain top to muddy swampland in a matter of seconds. Not even a roc can do that. Part of the atmospheric magic here is conjured by Byström’s strongs use of the “Cymbals of Inclement Weather” on his kit, summoning fog and mists.

The first side ‘Treasury Gardens’ also demonstrates much of the above, but I noticed here how Blanchard’s guitar has a lovely reverb effect or something that creates that instant “garage from the future” feel, by which I mean a kind of Link Wray superman figure wearing the skin of Zoot Horn Rollo and passed over the magic filters of Joe Meek. Superficially, I seem to have heard that sound before, probably on certain Keiji Haino and Fushitsusha records. One might be tempted to call this record a cross between Fushitsusha and Peter Brötzmann, but such a comparison does no favours to anyone. Least of all to Duncan Blanchford, who is certainly less “excessive” than Haino, by which I mean the effects stack is not cranked up to 115 at all times, nor does he feel the need to occupy every vacant space with intricate playing. Yet the album still remains very maximal, as already noted. And this is not to mention Blanchford’s demented vocal howls, which appear to horrifying effect on the second side. Consider this aspect an added bonus.

Exhaustion are described on their own Bandcamp page as “Melbourne psych rock thugs”, whereas Kris Wanders is indeed no stranger to Brötzmann and other FMP giants such as Bennink, Van Hove, and von Schlippenbach, with whom he has played. Strange how I never heard him as he was active in Europe since 1965, although he didn’t appear on that many FMP records and moved to Australia in the 1970s. Still, that is no excuse on my part. He somehow fell in with Exhaustion and they made a one-sided record for Endless Melt in 2015, and toured on the back of it. I think this release is absolutely lovely. Even the cover is stronger and subtler than the usual Feeding Tube shockers that usually adorn releases from this label, and seems a throwback to a time when improvisation records featured found images and old photographs to convey the idea of duo or group playing. (Such as, erm…The Topography Of The Lungs.) From 8th April 2016.