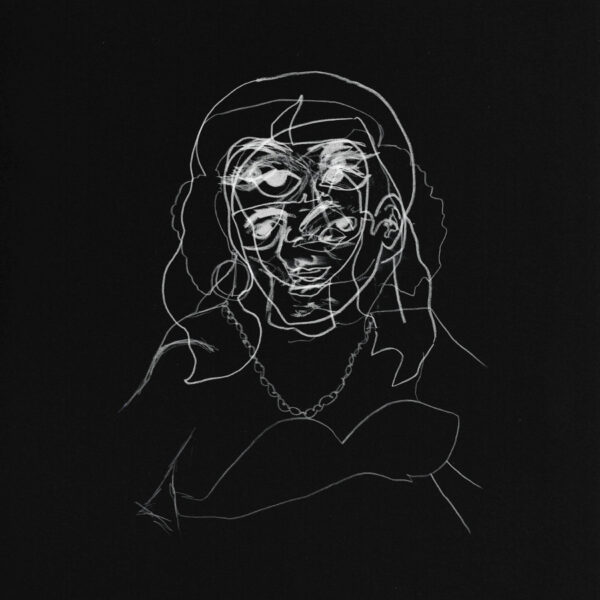 Last noted Klara Lewis with her Ett LP for Editions Mego, a memorable black pulser of rigid electronica abstraction in an all-black cover. Her newie Too (EDITIONS MEGO EMEGO 210) is on the same label, and again arrives in a black cover this time adorned with a line drawing by Klara herself. A woman’s head is superimposed with another head (perhaps two heads, even) until the layers of drawing multiply the intense eyes glaring in deathly fashion at nothing much at all. Klara has been continuing to perform her audio-visual show (music and projections) for the last two years apparently, and has now formed an association with Simon Fisher Turner, who contributed to two of the tracks here.

In this work, I’m continuing to enjoy what I read as a slightly aloof stance, and there’s a vague sense of detachment that exudes itself through this immaculately-polished set of layered electronic music with processed field recordings. Klara Lewis seems to keep “meaning” at bay, through her one-word titles that refuse simple associations, and her music that somehow remains disguised and ambiguous as to its true intent, even if it risks turning into wallpaper. Occasionally, as one the title track and ‘View’, rhythmic pulsations drive the track along, or rather seem to propel it like an unseen underground river; she’s never a one to over-state anything, and disinclined to mix her “beats” to the forefront of this very abstract art music.

Then there’s the even more abstracted episodes, like the dream-like ‘Beaming’, a charming and mysterious piece with its incredibly subdued tones punctuated with a mix of radio signals, distorted voices, and mixed field recordings. On paper that sounds like an uninspiring technical exercise, but ‘Beaming’ is a charming view through the fourth-dimensional mirror into another world, surreal, occluded, amazing details barely glimpsed. From 25 May 2016.