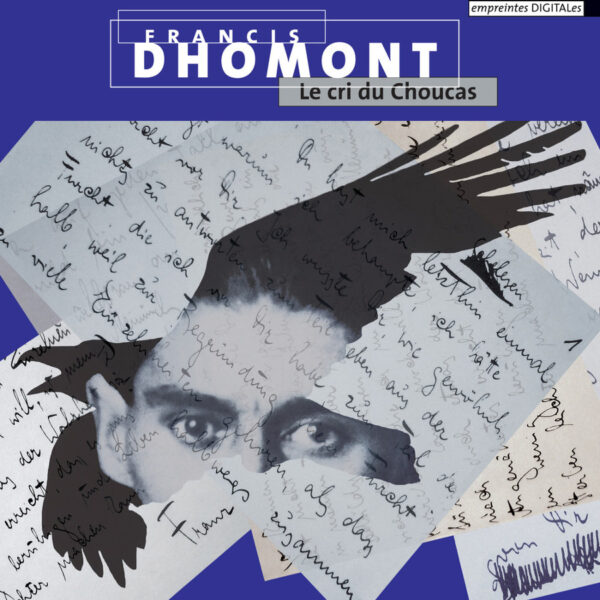 Veteran composer Francis Dhomont is one of the big noises in Canadian electro-acoustic and musique concrète composition, so it’s no surprise to see him represented on the showcase label empreintes DIGITALes with his recent composition, Le Cri Du Choucas (IMED 16138). Astute readers (and viewers) will instantly recognise the piercing eyes of Franz Kafka collaged on the cover art there. Le Cri Du Choucas takes the ideas of Kafka as its theme, a pursuit which Dhomont has been following since 1997. There’s a previous chapter, Études Pour Kafka, released by this same label in 2009; I don’t recall hearing that one, but the body of it has been reworked here. The composer also positions this release as the third and final part of a grand triologie, begun in 1981 as Sous Le Regard D’un Soleil Noir (released by INA-GRM in France) and continued in the mid-1990s as Forêt Profonde. He aims at extremes of drama, enriched with ideas about psychology; he wishes to plumb the depths of a man’s mind, through sound.

You could pick no better creator who personifies “unknowable depth” than your man Kafka; I’ve been reading his short stories since about 1979, and one day I hope to understand them. I can’t claim to have studied a great deal of critical analysis of Kafka, and I’m not sure that I care to; there’s a pleasure to be had for the reader in the constant mystification he sets up with his warped visions of European vistas, his mental labyrinths and strange symbols. I’ve no doubt there are numerous interpretations and explanations of The Trial and The Penal Colony, both works which feature in this music, but Francis Dhomont emphasises one particular aspect: the Law. Dhomont takes “the law” in Kafka to be “a metaphoric representation of the impenetrable realms the human mind hits”, and explores this theme with some determination. He probably reads Kafka’s work as describing a maze which always leads back to the same inescapable place, and ascribes the tone of despair and futility to the gloomy inevitability of mankind’s fate.

Dhomont also gives us his sonic take on other significant Kafka themes, including guilt, solitude, dreams, death, the family, and “impossible messages” – the last one being an apt description of Kafka’s own short stories, for this reader. On Le Cri Du Choucas – a title which incidentally translates as “The jackdaw’s call” and makes a punning reference to the Czech word Kavka – he does it through rich and maximal fugues of abstract sound. Everything has been heavily treated and processed through a vast amount of expensive-sounding digital crunch and filter effects, yet you feel you could somehow reverse-engineer these noises into their sources if you only listened for long enough. Alien though they be, some sounds closely resemble swarms of chattering voices in a huge mass, which is how I remember parts of Frankenstein Symphony by this composer (from 1997). Often these sounds coalesce and rush forward in a massed advance which seems unstoppable; it creates a suitably nightmarish and unreal mood for the listener.

The work is further illustrated and signposted by a good deal of spoken-word narration (in French), fragments of texts and documentary recordings which I assume highlight significant milestones in the design. But these interpolations also interrupt the flow of the music, and keep reminding us of the grand abstractions that Dhomont wishes to convey, barely allowing us any space to conceive our own thoughts. This is one of the stumbling blocks for me on this otherwise exciting release, as it lends an air of didacticism to the work; it’s like being lectured by stern academics in a stuffy University where the Kafka syllabus hasn’t been updated in over 35 years. One senses that the masters at this academy would have no truck with Orson Welles’ free-spirited cinematic interpretation of The Trial. It’s also something of an old-school musique concrète technique, one which has tended to mar my enjoyment of Pierre Henry’s Apocalypse De Jean, that famed Oratorio Electronique from 1969. This aside, you can comfortably play this meticulous work at peak volumes for immersive and transporting effects, to induce profound states of mind…from 25 May 2016.