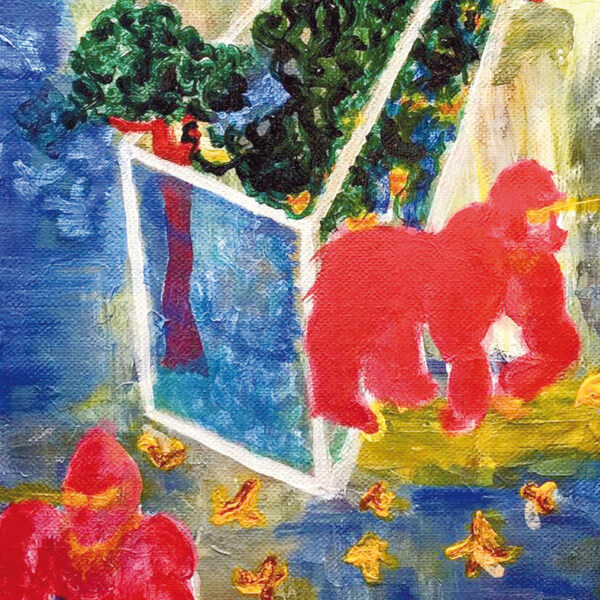 Last noted American composer Celer (Will Long) with his Akagi loop piece, a highly meditational drone work made from loops…Inside The Head Of Gods (TWO ACORNS 2A10) is equally serene and beautiful minimal music, this time made with an organ, and integrated with an exhibition of paintings by the Japanese artist Taichi Kondo, whose brushwork adorns the cover to this release. Will Long was inspired by Kondo’s paintings, and found himself with a wealth of ideas for how to represent them in music – perhaps too many ideas, with a variety of lengths, timbres, structures and volumes. He wanted to represent the truth of Kondo’s work in a way that would sound appropriate in a gallery setting, so he made the decision to simplify everything and simply use only the first piece he recorded – these 20 minutes of organ music. Now segmented into ten episodes, the final result is a master-stroke of understatement, and the stricture instructing us to “listen at medium volume” means we can enjoy a gentle but insistent ambient experience which drifts in and out of consciousness, occasionally coming into focus as needed. Fitting for the “pictorial” theme, it does indeed convey a sensation of “colour” somehow, perhaps through the warm tones of the organ. Celer is convinced it’s a distillation of his earlier unused experiments from this project, and finds that “all of those elements from before were actually there, just in a similar form of each other, rather than separated.” A simple delight from 25 May 2016.