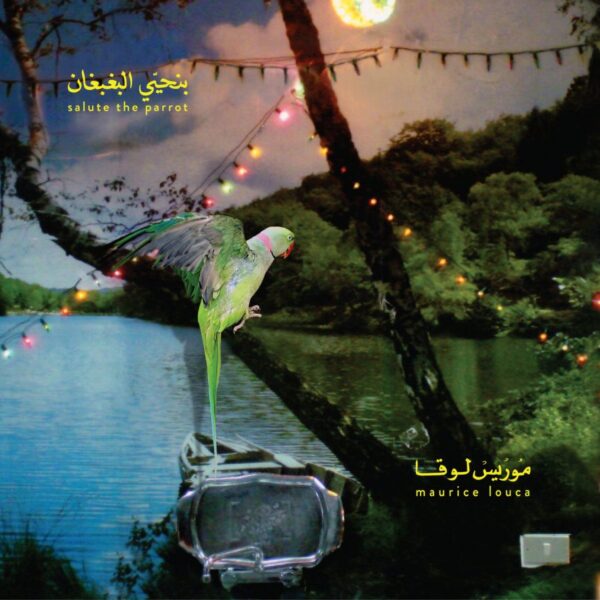 I recently heeded the Economist’s warning us of “New Arab Awakening Coming” and in light (and darkness) of recent tragedies in Syria, the headline could, sadly, be read in more than one way. Of more favourable portent however, the middle-eastern music scene is now wide awake; its doors of perception pried open by the mercurial Maurice Louca. Opening with a title like ‘The Golden Age’, Salute The Parrot fulfills the headline’s potential optimism: this pounding 4/4 anthem, charged with a fireworks display of keyboard arpeggios and more feather-fingered improvisation, proclaims the current state of chaos as the Best of All Possible Worlds; an marked determination that Louca and co see through to the (less than) bitter end: one piece of polished, party pop perfection after another; so long as we’re talking about a party at the end of the world.

Louca’s polarity-inverting wizardry first came to our attention owing to his involvement in the pan-Arabic ‘supergroup’ Alif earlier this year: his ‘space-inducing’ textures adding dizzying depth to the group’s Arabic flavoured psych-rock overtones, though it’s group affiliation made difficult by the fact that the members all live in different countries. In the meantime he has recorded and toured with Alan Bishop and Sam Shalaabi as The Dwarfs of East Agouza (both of whom do spot work here, incidentally) alongside numerous other signs of his ill-disposition towards sleep.

Salute The Parrot sees Louca running a tighter ship; an autocrat’s whip-hand shaping his musical cohort’s output into something far more focused than any of his more democratic liaisons: eight songs running at just under 40 minutes with levels of action and detail that really push one’s attention through its paces, even after countless listens. Grounded in the Egyptian shaabi style, they are, broadly speaking, distinguished by heavy dance rhythms that shelter strata of intricate hand drum patterns, accompanied by bursts of anthemic poetry and blurs of microtonal syncopation: a proto-nuclear mass of ornamented protest song exploding with the joys and frustrations of street-level Egypt, and the confrontational energy it deals with.

Keeping with its policy of social democracy, there is space here for those with and without attention span, which is to say you can take or leave the social politics or the visual statements about media appropriation of images and simply enjoy the music. Indeed, were popular culture still not so obsessed with preserving mediocrity, Salute the Parrot would be a true pop album of the people. At the same time, it’s not unlike the more occidentally oriented musical melange of the Secret Chiefs 3 – who share top shelf musicianship and the idiosyncratic syncretism of innumerable ideas and influences. One senses beneath all of the clamour and energy a philosophical stance that demands nothing less than a broad musical palette such as this, yet while imposing so little obligation on the listener. Not for nothing then is this album not titled Salute The Magpie: its expansive, multi-coloured hue is as natural a wonder as an iridescent plumage, at the seams with seamlessly blended stylistic motifs that effectively reject the insatiable cravings of vain and wanton eclecticism.