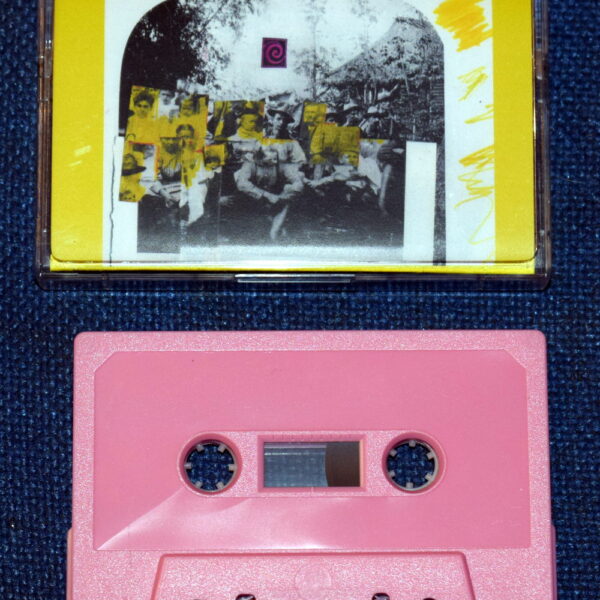 Occupying a not-dissimilar zone of turf to the previous item is the Final Seed / Dylan Nyoukis split cassette (TUTORE BURLATO #08). On the A side by Final Seed, there may be electronic music, keyboard drones, samples and tape manipulation going on in this slow-moving procession of surrealism, and it’s doubtful whether even the creator himself knows for sure. This was recorded in 2015 at Mankato in Minnesota. Strangely beautiful music leaks out, surfacing to the top of confusing swirl of strange, alienating noises and absurdist treatments. I like the way the mood veers from feeling humourous and slightly silly to something verging on the edge of an industrial nightmare, often doing so in the space of seconds. The episodic, drifting nature of this dual-layered suite is really something to savour; a compelling dreamy fugue of stitched-together notions and jottings. Final Seed may be Jameson Sweiger and has released a few obscure cassettes for Fag Tapes, Alien Passengers and Chocolate Monk since 2009.

The side by Dylan Nyoukis has been derived from earlier works, a trilogy of cassette-with-poster limited edition releases from 2014 and 2015 called Encephalon Cracks Volumes 1 to 3, which appeared on his own Chocolate Monk label. For this tape, presumably some form of distillation, cutting-up, reworking or radical reprocessing of the sources has been executed, but I never heard the originals of those highly obscure items, so who knows? While there’s some characteristically unsettling vocal chatter at the start of this tape, for the most part it comprises minimal variations on an electronic drone pattern, to create a mesmerising force-field of blocky anti-energy that draws its listeners into a trance by dint of its fascinating monotony. It’s almost brutally single-minded and machine-like, apparently executed with a blithe indifference to its audience.

The above notes about TUTORE BURLATO #08 are provisional, since my raves may be applying to the wrong sides. In my defence, it’s impossible to tell. The pink cassette is issued with no labels, or any distinguishing marks allowing us to tell Side A from Side B; this is probably the way they like it, since it adds to the general air of disorientation and confusion.