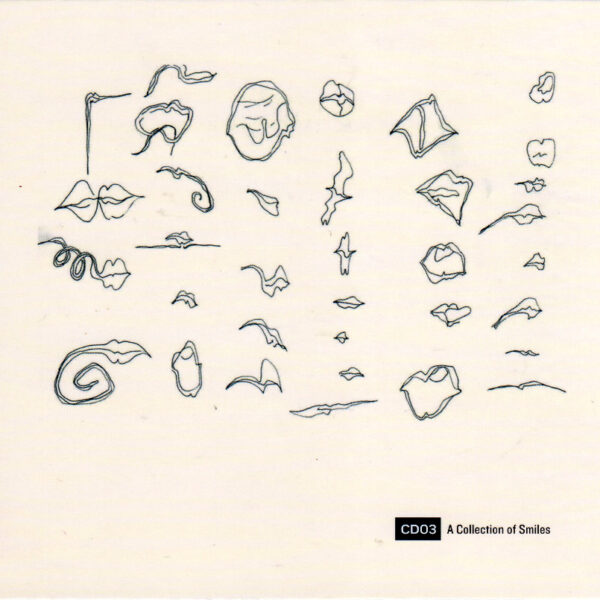 Another segment from the Stille Post (BÔ?T RECORDS BR R010 / MONOTYPE RECORDS mono100) box set by Alessandro Bosetti. CD03 is called A Collection Of Smiles. This is another piece for WDR, dating from 2011. Listening to this one “blind”, it seems at first like a stream of rather banal chatter from the mouths of a pan-international set of middle-class people (Australian, Europeans), not saying very much of substance to each other. In fact, the reality of the event wasn’t far from that. Bosetti set up a “situation” where a group of people would meet in the studio and told to speak to each other for one hour, without any directions as to what they should talk about. Some of these people knew each other, some of them were total strangers. Since the artist was recording every speaking voice on a separate input, at the end of this social experiment he now had in his hands a collection of voice elements which he could splice and rearrange as he saw fit. This is what ends up on A Collection Of Smiles. What may start out as something resembling a document of idle restaurant chatter soon turns into a form of vocal music (the repetitions of certain phrases become evident very quickly, creating a song-like effect with verses and choruses), or a form of abstract sound poetry as the voices pile up in rapid-fire collision edits, resulting in pleasing effects of near-gibberish. Meanings are altered subtly, as unrelated sentences are glued together. Although we might stress that there’s no processing of the sounds; Bosetti isn’t out to transform these voices into monstrous groans, for instance, which could be done by time-stretching. The rapid-fire effect, I’m slowly coming to realise, may be one of Bosetti’s trademarks; he likes a rush of information delivered in a dense parcel, and he expects us to keep up with these changes.

The other major dimension to A Collection Of Smiles is the musical score. Bosetti has noted down certain cadences and changes in timbre in the way his subjects speak, and annotated them, transforming them into a musical score. This score is then played back at certain junctures by a small chamber ensemble, in which I can hear piano, guitar, and I think some woodwinds. The precision and ingenuity with which these musical passages are matched against their spoken-word sources is uncanny, yet Bosetti doesn’t even call attention to it; he does it effortlessly, and weaves the passages into the fabric of the work without us even noticing at first that it’s even happening. The first time I heard an instance of a musician doing this was Harry Partch and his Bitter Music, where he was able to document speech patterns of people he met during his hobo years in America, and recast them as musical phrases. (See the third disc of Enclosure 2, INNOVA 401, 1995)

This leaves us with the possible task of “decoding” the content or meaning of A Collection Of Smiles. But I’m not sure if there is any. On the surface, the work feels like a 50-minute musical approximation of a Twitter stream. There’s something relentlessly upbeat about the self-satisfied tone of these individuals and their jabbering that prompts this observation, and the shallowness of their observations is only increased the more it’s repeated under Bosetti’s editing knife. As directed conversations go, this is clearly of quite a different order to the stoned freaks sitting under a tarpaulin with a piano set up by Zappa for his Lumpy Gravy album. However, the record does once again display Bosetti’s remarkable talent for fashioning dense and complex statements from his source materials, and the “different and ever-changing constellations” he is able to build in mosaic fashion clearly delights him.