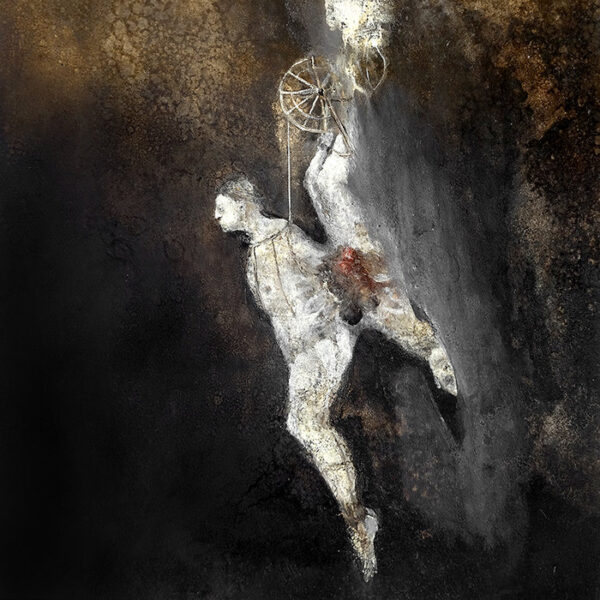 True it is that French avant-garde black metallers Deathspell Omega have spread their influence widely across the world and across metal genres, and most bands who fallen under DSO’s spell have been content to follow in that band’s shadows and rarely venture beyond to take the Tao of Dissonant Metal into new territories. One band who might prove the exception is Russian trio Grey Heaven Fall on their second album “Black Wisdom” with a despairing message about the nature of God as a capricious, even psychotic and nihilistic being who demands humanity follow Him in His less-than-godly image, only to reject and damn His faithful when they obey His decrees. GHF play a straightforward and melodic song-based style of dissonant black / death metal, very similar to DSO in sound but easier on the ear in its structures and rhythms, with many surprises for those expecting yet more DSO hero worship and nothing else.

The first half of the album plays out in fast-paced minimal black / death style, dominated by grating raspy vocals filled with a mixture of anger, frustration and hopelessness. The long songs reach epic heights of sorrow and tragedy thanks not only to the dense and layered music and the intense emotion in the vocals but also passages of solo lead guitar that deliver even more pathos, as if there was not sadness enough already. The turning point where we start to sense that GHF are staking out their own territory comes with “Sanctuary of Cut Tongues”, a completely dark ambient piece springing from some hitherto hidden depths where black smoky mists block out the light and discourage entry, and only a forlorn guitar and distant chanting are evidence of spirit activity within. From then on, the remaining tracks stand out for their musical diversity: “Tranquility of the Possessed” includes slow doom elements along with the usual blackened death and “That Nail in a Heart” features a passage of downbeat urban blues guitar melody transitioning into a soaring prog-rock lead guitar solo of incredibly dark loneliness, and later a taut but delicate descent into a quiet atmospheric coda after more black / death rumble.

Parts of the album, especially in its second half, could have been edited for length and the production doesn’t quite do the music justice – it’s clear enough but doesn’t bring out the band’s full power. The drums especially don’t seem as thunderous as they should be for such intense and complex music. Apart from these admittedly technical details, the album is a very good and thoughtful effort. GHF certainly have the ambition, vision and technical chops to carve out a long and distinguished career. They do need to have a more distinctive sound away from the DSO worshippers: taking their music into realms of atmospheric, even psychedelic prog-rock might be one way of achieving that.