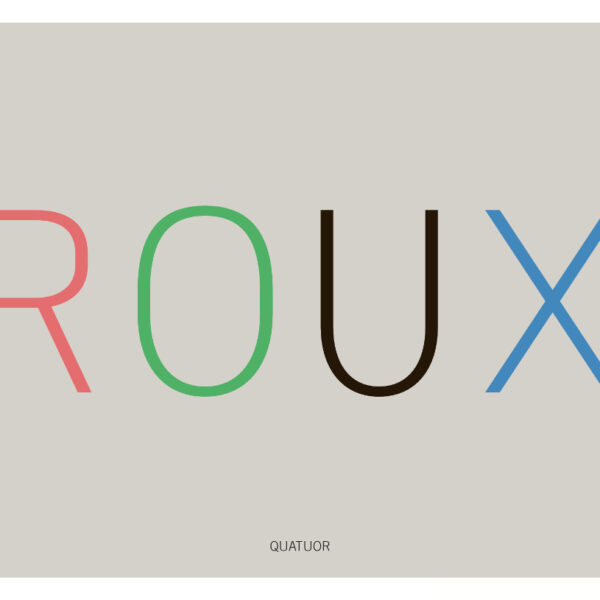 Quatuor is an immensely satisfying 1 and skilfully woven four movement electroacoustic suite, which yields fresh sound perspectives and connections with each subsequent listening.

How form is developed and communicated is a problem confronting any composer of electronic or electro-acoustic music. Roux has fashioned an interesting developmental method of his own, which he terms ‘sonic translation’, using pre-existing works (visual, musical or literary), as ‘scores’ for new musical pieces. This method has not only generated Quatuor, but also a piece (Inevitable Music no.1) based on Sol LeWitt’s ‘Wall Drawing no. 260’. LeWitt’s notion that ‘the idea becomes a machine that makes the art’, seems foundational to Roux’s own ‘sonic translations’, and has much in common with the methods of ‘process music’.

In Quatuor Roux has set himself overarching formal or process constrains; firstly, all of the material is drawn from Beethoven’s String Quartet No 10 in Eb Major, secondly, the structure of Quatuor follows that of the original string quartet (sonata form, rondo, scherzo, variations). Roux asked fellow composer, Mathieu Bonilla to transcribe nineteen short fragments of the quartet for an ensemble of flute, clarinet, french horn and percussion. These recordings are the material that Roux then transformed electronically into Quatuor, and Roux’s method of working locates the work within the field of musique concrète. The final overt constraints were that the transcribed fragments from the quartet should appear in the corresponding movements of Quatuor (and in the same position), and that the proportions of each part of each movement should be the same.

Whether similar ‘micro’ specifications apply to the electronic transformations that Roux applies to his acoustic material is less clear, but, on the evidence of his planning for Inevitable Music No.1, it’s certainly possible. I, for one, would love to know how – and through what – he processes his material. It’s one of my small bugbears with electronic / electroacoustic works; I can’t always work out or ‘hear’ what’s creating a sound!

Roux has placed sufficient references and signifiers around the artwork itself to lead us to the expectation that Quatuor will be a serious work of art music, even before a note of music has been heard. Such signifiers include the use both of the Beethoven quartet as ‘material’ and in his adoption of the original quartet’s Italian movement names for his own work, and also the use of the ‘traditional’ technique of transcription whereby the set of forty variations of nineteen fragments becomes, for a while, the most important element of the work; a score – an interpretable set of instructions 2 by a composer to performers (that foundational necessity of the European art music tradition).

By subtly weaving together the transcriptional and the transformational, Roux has found a method of deploying all of the elements of ‘traditional’ music, albeit in artfully re-purposed ways. Glimpses of melody, metre and harmony linger like embers throughout the arc of Quatuor due to Roux’s subtle interpolation of traces of the original ‘real’ instrumental variations with their electronic transformations. Pitch, timbre, texture, dynamics and rhythm are equally present, and these elements Roux deploys with great skill and sensitivity to create an extraordinary, and often very beautiful, flow of dynamic, textural and rhythmic accords and contrasts.

If the work of Bernard Parmegiani or John Wall or Stockhausen’s early electronic works appeals to you will almost certainly find yourself greatly taken with Quatuor. Alternatively, if you are looking for a way into the acousmatic sound world, then I would recommend this album, wholeheartedly and unhesitatingly. I hadn’t come across Sébastien Roux before this review, but I’m very pleased indeed for the introduction.