Two more cassettes from Kassettkultur are by Maja Ratkje and Bjørn Hatterud, both made at the same time and only ever sold together as a pair; “will not split” is the familiar rallying cry of antique dealers who hold a fine pair of ancient jugs. With the jury’s permission, we will mention them here together.

The first of these, Focus Foucault Foccaci (KULT 014), is not much more than a cassingle, and contains two tunes at five mins apiece. On one side the duo – appearing here as Solveig Kjelstrup & Maskinanlegg – appear to be adopting a quasi-ethnic stance with a performance based on percussion and a shenai-like reed instrument, to produce something Sun City Girls might have belched up as an interlude on one of their earlier ethnic forgery LPs. Or maybe it’s intended to remind us of Don Cherry and his bamboo flutes when he played with Ed Blackwell in 1969. At any rate it’s recognisable as music, which is more than you can say for the puzzling flip side. A nightmarish take on a patriotic song from the 1930s that was never written, or a national anthem for the smallest non-existent country in Europe, is put through the tape-processing treatment until it acquires a nasty and vaguely disturbing patina. The singing voice especially is something that creeps up your spine like a jellyfish. Not that the singer sounds especially menacing, but you don’t want him hanging around your house for long. Limited edition of 30 copies for this surreal slice of pie. Maja Solveig Kjelstrup Ratkje, to use her full name, is a genius composer, improviser and noise maker who never ceases to surprise me with the ease, expertise, and commitment with which she takes on each new and wholly unexpected project. Bjørn Hatterud should be notorious to all as a member of the Norwegian collective Origami Republika, a sprawling project of weirdness whose aim was to overthrow the known world through subversive, absurdist antics; it’s impossible to tell how many records they made, as they kept changing their name, and so evaded the confining boundaries of officialdom, keeping everything fuzzy around the edges. It’s a strategy that always pays off. 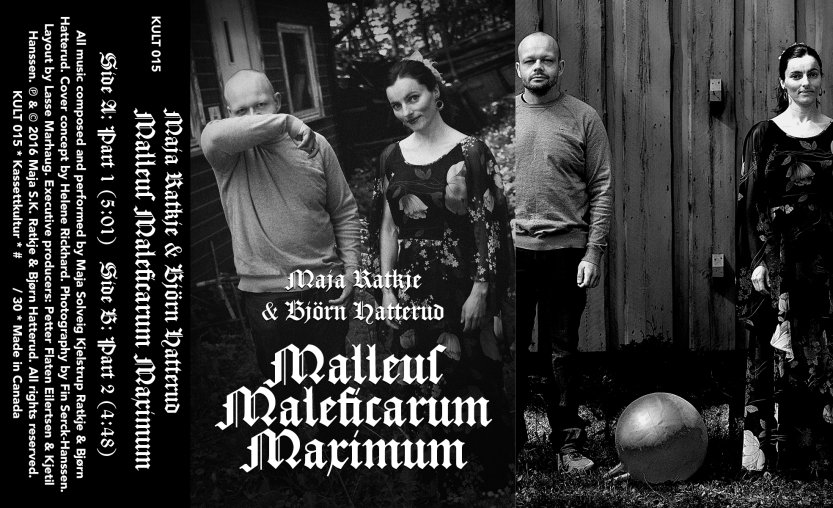 The second tape, featuring the same personnel, is called Malleus Maleficarum Maximum, and with its monochrome cover, gothic styled lettering, and supernatural title, it may fool some Black Metal fans into buying it. Boy, will they be in for a surprise! One side is a short fragment of ingeniously compacted music, perhaps using tape loops, that feels like a distillation of all 19th century classical music and opera that ever dared to flirt with a “heroic” theme (and thus drove its composers mad or deaf, or both). It becomes a nostalgic view of an imaginary past that never existed, now somehow transplanted into our ironic modern times for hipsters to wonder at. That’s the power of time-travel with which I credit these two deadly magicians. Part 2 is even more alarming. Voice elements are detectable here and it feels like human beings made this noise, but it also feels like monsters and wild beasts were involved at some point. The ingenuity lies in the simple layering together of elements that don’t fit, and relentlessly bringing the thing in for landing against all the laws of sanity. I’m feeling unhinged just thinking about it…maybe there really is a “black magic” thing going on after all. As you all know, Malleus Maleficarum refers to “The Hammer of the Witches”, a 15th century guidebook for how to expose witches and then put them on trial, supposedly issued by the Catholic church. God alone knows what your basic witch-hunter would have made of these two musicians, if he’d been forced to endure this mind-melt of a cassette.