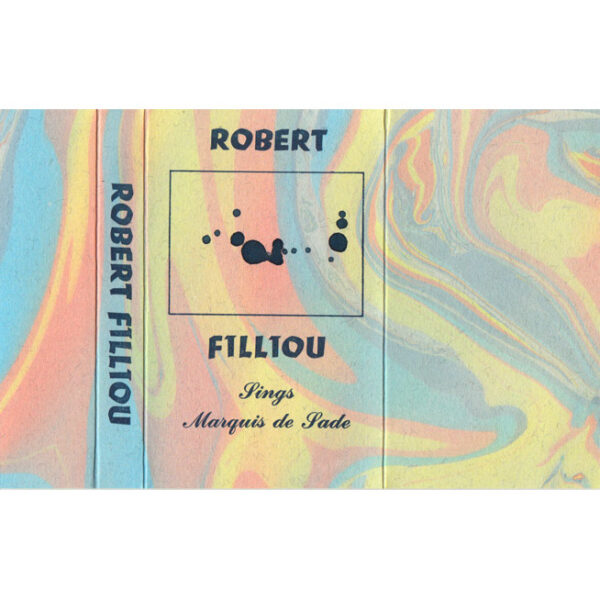 Here comes one of those obscure oddball recordings that’ll have most of us worrying for the state of mind of their creators, wondering whether they really are as serious as they appear to be on the recordings themselves, are performing with their tongues rooted firmly in their cheeks, or have some ulterior sinister, possibly dangerous motive behind their choices of subject matter to inform their art. Sole performer Robert Filliou’s background is as intriguing as this recording, found in someone’s old basement and until now never considered part of his corpus of works: born in France in 1926, he fought for the French Resistance during World War II and later emigrated to the US where he worked at a series of low-paid jobs while studying for a master’s degree in economics at UCLA. He worked at the UN and embarked on his artistic career in 1960 as a member of the Fluxus movement, creating theatrical and film performances, sculptures and happenings. He later moved to Canada with his wife in 1977 and spent the last three to four years of his life living in Les Eyzies in southern France where he died in 1987.

Singing completely a cappella, Filliou performs excerpts in English translation from the various writings of that notorious late 18th-century libertine novelist / theatre critic the Marquis de Sade. Filliou takes us on a tour through time and space of the divers excruciating tortures and punishments that humans have inflicted upon one another, often under the pretence of carrying out justice. The artist isn’t a bad singer at all and with some training could have led his local church choir if the rector had been prepared to overlook his former French Communist Party membership or any fascination with the more lurid apocalyptic visions of the Book of Revelations. Starting with the Irish, the Norwegians and the ancient Celts, Filliou ticks off the bucket list of nations past and present and their particular associated brutal torture specialties: be it crushing people’s skulls with thick staves, disembowelling victims and filling up the cavities with salt, or feeding prisoners to horses crazed from starvation, Filliou dutifully covers most modes of punishment (thankfully, not in much detail) in a moderately high-pitched chanting voice that’s as deadpan grim and matter-of-fact as can be for this material. (Strangely he misses out on the infamous Chinese punishment known as the Death By A Thousand Cuts or the various imaginative Japanese tortures – but then Sade died a long time before he could have heard any of Merzbow’s music.)

Hear enough of this solemn monologue and you can’t help but giggle at the ambition and determination behind it. The most remarkable aspect of the recording is that Filliou manages to plough through Sade’s exposition of the most astonishingly devious and callous punishments ever to spring out of the human imagination without collapsing in fits himself. His voice becomes ever more trance-like and somnolent as if he were reading through the daily grocery shopping list for the hundredth time.

The cassette’s packaging limits itself to Filliou’s name, the title of the work and a swirling background of pale colours such as might be seen when blowing soap bubbles, so the rationale behind performing these texts (most of which is not attributed to any particular work or works by Sade) remains unknown. Listeners must decide for themselves what to make of this recording and what to take away from it. I personally chalk it down to Filliou being mischievous, taking the mickey out of himself and confounding people’s expectations of him and his opinions. On another level, Filliou’s performance and his impassioned summary at the end about what he has just done leave listeners uncertain about his view of Sade and human nature: does he support Sade’s pessimistic view of humanity, that humans are incapable of moral or spiritual improvement, or is his performance a critique of Sade’s philosophy and outlook? One also has to admit that Sade in his own way was brutally open and honest about the extent of human depravity, above all how much it is a natural part of the human expression, however much we fear it and try to deny or justify it.