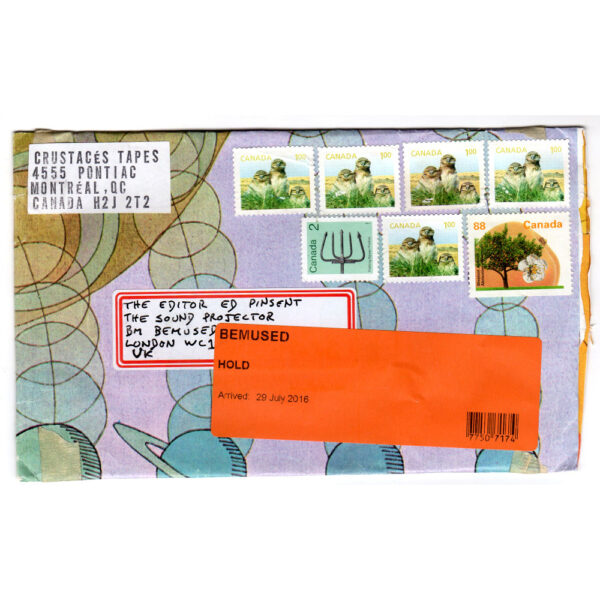 Here is the latest release from Crustacés Tapes, sent to us from Montreal – an art-tape label whose understated releases usually arrive with a printed card that’s been hand-decorated and the minimal text has been applied on with a John Bull printing set. Ryoko Akama is a new name to these pages, but she’s a well-respected composer and sound artist who runs a label of her own, Melange Edition, and also co-edits a publication with the foreboding name of Reductive Journal. She’s extremely minimal; proud of her “almost nothing” aesthetic, her plan is to create small sound events which I suppose are taking place on the fringes of human perception, often using small everyday objects (toys, balloons, bottles) to trigger them. In the case of Hako To Oto (CRUSTACÉS #8), the small object in question is a music box. If you spin the tape, you might hear the occasional note issuing from said box within the confines of the “rural hotel room” in Portugal where it was recorded. Mostly though, you’ll hear a lot of silence, a lot of room tone…this is also part of Akama’s plan, creating “situations that magnify temporal/spatial experience with silence, time and space.” I found this release very testing, with nothing in the way of aesthetic enjoyment to reward one’s patience. But I expect I’m approaching it all wrong. It’s very clear she has virtually no interest in the music played by that music box, and wants the sound to break up the silence, or to punctuate the silence in some way. Maybe she intends this punctuation to take place on a grand scale, as though drawing a map of the hotel room, using sound as callipers. In a way I have to admire Ryoko Akama’s determination to refuse conventional “beauty” in this work, and it obstinately declines to become anything more than just a tiny music box making occasional sounds in a silent room; no existentialist “meaning”, no transcendence through repetition, no deep listening, not even an appreciation of the silence, which Francisco López might once have insisted on. If any of this is near the mark, then it’s possible that Ryoko Akama is setting out a new benchmark for what minimalism might mean in the area of sound art. For more of her compositions, text-scores, installation pieces and so forth, see her site; she has performed Alvin Lucier’s Music on a Long Thin Wire, but that composition seems positively eventful compared to this. Arrived 29 July 2016.