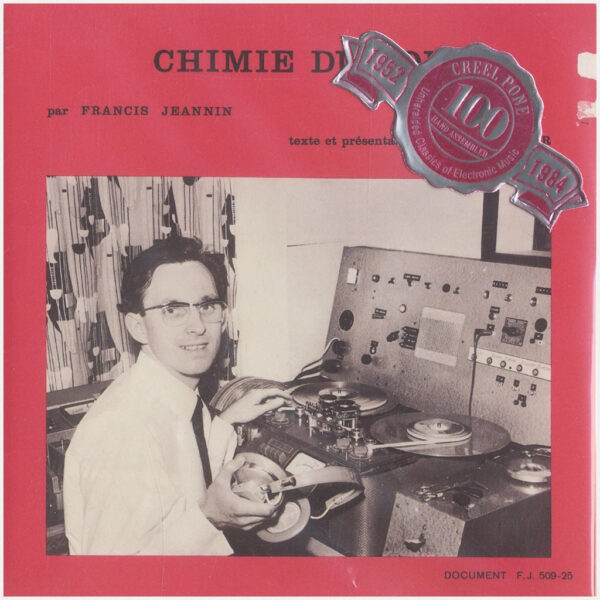 In his quest to cram as many riches into this limited series of double-CD releases (to expire with the 200th release), the Creelpone collector has packed this twin-barrel treasure chest with all the known recordings made by Swiss sound engineer Francis Jeannin; this set includes the entire compilation “Stoeien Met Geluid, 25 Jaar Amateur-Geluidsregistratie 1951-1976″ on Disc 2 of musique concrète recordings made by various amateur sound artists, among which can be found a piece by Jeannin which turns out to be an extended version of an original work on Disc 1.

Disc 1 itself is made up of a private-press 10” vinyl release Jeannin made in the 1950s, followed by a second 30-minute recording “Mah Jong II” by composer / choreographer Emile de Ceuninck on which Jeannin contributes electronic doodlings. The longer work was created for an ensemble featuring soprano singer Adrienne Biet, jazz piano and percussion, and is quite pleasant (if of course very long!), but Jeannin plays a minor part providing some electronics and tape manipulations. The 10″ vinyl release is much more interesting and brisk, and is essentially a lesson in which Jeannin takes his audience through his techniques and methods of speeding up or slowing down sounds and chopping and cutting them up into the raw material to create music or recreate popular ditties of the day. He lets fly tunes like “Silent Night” in the most wondrous tones, so delicate in their sound and etching yet so redolent of the memories of everyday objects and their associations, of which so many have become redundant and passed into history. The sounds of car horns, screeching tyres, aeroplanes, jazz drums and other paraphernalia from the background fabric of post-World War II European society are all rich raw material for Jeannin’s tinkering. His chatty lectures (in French) give way to his amazing little musique concrete offspring who spring into our world and flit and zip joyfully through the air from the loudspeakers. On Disc 2, amid a mind-blowing collection of the oddest of oddball home-made “amateur” tape collages and electronic dabblings from various European sound artists (and one South African fellow), an extended version of one of the “Chimie du Son” tracks, “H2O”, appears smack bang in the middle and is quite a relaxing piece with a laid-back lounge lizard tune (which I know I’ve heard elsewhere but I can’t remember the title or the original artist). If you’re really curious about this “Stoeien Met Geluid …” compilation, the real dubious glories are elsewhere on the disc: there’s a strange number “Sink Symphony” by Britisher R S King which is devoted to the sonic marvels of British hotel plumbing; and a jolly German dance tootle called “Pipsy” by Gerd H Nieckau, whose compatriot Jurgen Sprotte has an obsession with playing another ditty several different ways on “Das Tanzende Pausenzeichen”. Much later on the disc comes Manfred Eichler’s Exercise with Soundgenerator and Coffeetin” (sic). I must advise though that there are several tracks on the compilation that will make you cringe and squirm in embarrassment for their creators. But we lovers of strange music must embrace the clunky and the kitsch, the jaw-dropping what-the-f***-were-they-thinking? creations along with the quirky, the charming and the eccentric, as context changes along with the passage of time, and what is shunned during one period may become a classic in another.

Altogether these collections provide a fascinating snapshot into those aspects of popular Western culture and technology that intrigued people like Jeannin and others of his time to want to sample, shape and reproduce the sounds of this new technology, to revel in the opportunities it offers and to share what they find and create with others. The music that results becomes a historical document of the popular culture of its time and what it says or implies reflects the hopes and desires of its society.

I haven’t been able to find out very much about Francis Jeannin himself but this link to an article dated 1999 about a clockwork phonograph player made by someone of the same name living in La Chaux-de-Fonds looks promising. The same dapper gentleman inventor is also featured at this link, and is mentioned as having passed away in 2013.