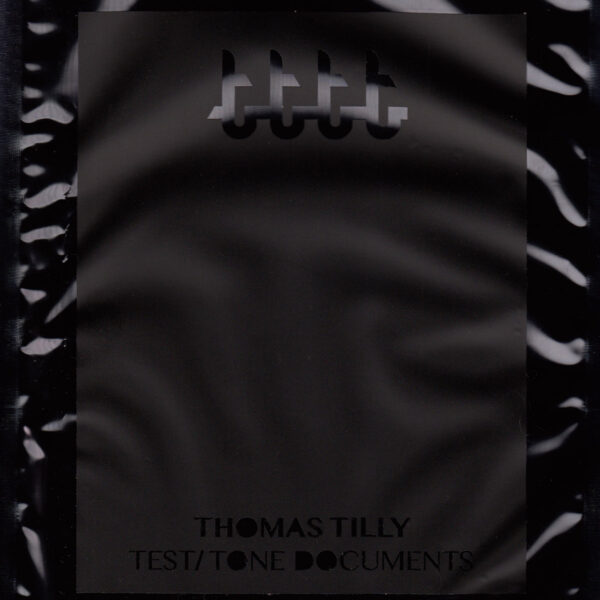 Test/Tone Documents (DRONE SWEET DRONE DSD018) is a new release from sound artist Thomas Tilly, whose work keeps growing on us here at TSP HQ. We normally associate him with field recordings as the starting point, but his work also mixes up such recordings with electronic music, and in places the whole Tilly career shades into some form of research, or investigation. On Le Cébron / Statics and Sowers, he did it with fields of broken ice at a lake in France, while on Script Geometry his starting point was the wildlife teeming in a rainforest environment. On Test/Tone Documents, his “subject” is a building in Reims, the modern arts centre La Cartonnerie, where he made this collection in 2007.

The aim appears to have been to document various sound events happening in the building, and – like many who have created similar statements – Tilly believes he has discovered the “central nervous system” of the building when he finds the electronic network that powers it, by which I suppose he covers everything from computers to lighting, lifts, air conditioning etc. We have encountered similar explorations by Francisco López (Buildings New York) and more recently Hannah Thompson and her work in Senate House, University of London. Tilly is evidently trying to make some statement about architecture and the use made of the building; he alludes to something rather intangible, suggesting that these sounds are merely traces of former activities, or “residual matter” as he would have it, and that in some way the four walls have “eroded” the sound made by these activities. This is shading into the metaphysical; I always reach for Nigel Kneale’s The Stone Tape as a comparison at this point, and want to ask the sound artist in question “is this what you mean?”. Kneale’s proposition was that the four walls of a building could actually record history by “capturing” the intense emotions of past violent events in the very fabric of its bricks and mortar; when these “records” of the events were replayed, we would see ghosts. It certainly terrified me as a teenager when I saw it on the telly in 1972.

Tilly’s investigations are thankfully more benign, and I found Test/Tone Documents to be a compelling listen, fascinated at the variety of textures on offer and listening with rapt attention as the building moves through its paces, like a friendly machine. If you’ve ever found yourself paying attention to an old fridge motor doing its stuff, you’ll understand why this might be of interest. Not only is it a vaguely reassuring sound, it even seems to tell a story (in an extremely abstract, bare-bones manner). The record thus succeeds in its aim to create a “listening space”; there is enough room here to wander around in, and breathe. López, in his work, made the New York building seem claustrophobic and alien; you are in no danger of that happening here. If you buy the full package (I only received a music CD and a one-sheet press handout) you get a set of documents printed on acetate (?), a poster, and a black sleeve hand-made by Jonathan Gowthorpe. From 10th August 2016.