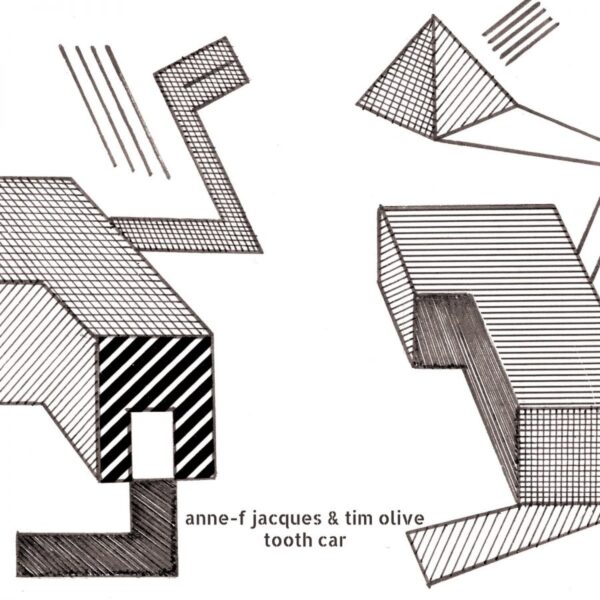 Tim Olive and Anne-F Jacques are grinding the meat once again on Tooth Car (INTONEMA int020), and a welcome return for this duo who we last heard rubbing their bits together on Dominion Mills in 2014, when they did it with rotating electric motors and magnetic pickups. That particular orgy of action seemed to strike me as a rich sun-drenched drone for some reason, an observation we can’t exactly apply to Tooth Car. The first cut, recorded in Washington DC on one November night in 2015, completely reflects the short nights and grim overcast days of that particular month, and listening to this airless, grey scrapey music is like living the shortest month of the year over again, with all the cold and depression it usually brings. What’s interesting is how to duo start off by making a recognisable pattern or rhythm with their abstract gronks, then stop doing that when they realise it’s got the potential for fun or amusement. The remainder of the cut is like being pulled on the world’s slowest sledge through the world’s coldest snow by the world’s sickest team of huskies. I wasn’t in a hurry, in any case.

Well, eight days later they were doing it again, this time in a venue in Boston. Evidently they must have agreed between themselves that the Washington gig was far too “interesting”, and decided to tone down the excitement levels by about 18 degrees. Accordingly, the rule of thumb for this slow performance must have been to switch to the “unplugged” mode; if Anne-F Jacques had wooden, hand-cranked rotaries at her disposal, this would have been the time to use them. And if Tim could figure out a way to play magnetic pickups in a manner that didn’t depend on electricity, he’d be filing a patent this instant. Nevertheless they did the best they could, and the minimal, uneventful results are all yours to savour for 18 minutes of ritualistic mystification. I think the title Tooth Car is highly suitable for this release, and conjures up visions of a particularly wayward approach to dentistry, unlikely to be approved by the American Dental Association any time soon. The very good drawings for this release’s cover are by Julie Doucet, a fine Canadian underground comic artist who used to produce a book called Dirty Plotte. If these hard-edge abstractions are anything to go by, she seems to have relinquished her earlier taboo-breaking predilections. From 15th August 2016.