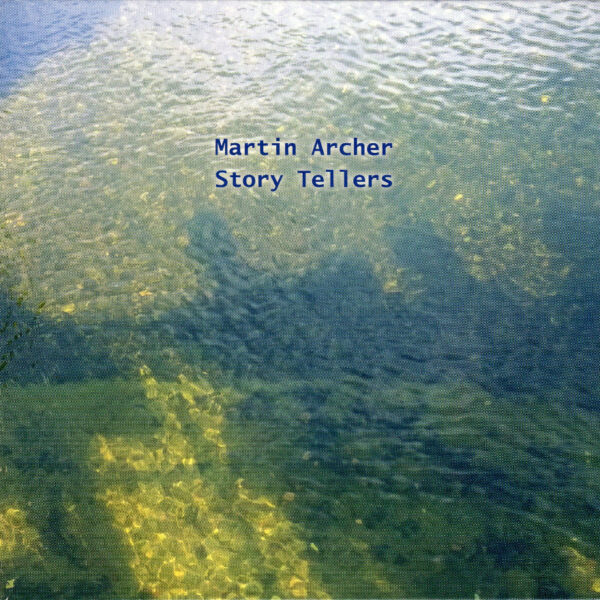 A sumptuous jazz-based release from Martin Archer, the UK composer, bandleader, improviser and wearer of many other hats. Story Tellers (DISCUS MUSIC DISCUS 57CD) contains two CDs generously laden with highly enjoyable English electric jazz, packed with melody, swing, and passion, and bound to appeal to anyone who enjoys the so-called “Electric” Miles records, Keith Tippett’s big bands of the 1970s, the Jazz Composer’s Orchestra, the Escalator Over The Hill record, and such like. I’m always impressed when I hear a powerful Charles Mingus record and assume that it must be an 18-piece orchestra playing, then am pleasantly surprised when it turns out to be a quintet. I had the same sensations when I learned just six players were responsible for Story Tellers, and from what I can gather most of this material is heard as played in the studio, and there is very little post-production work. The band are Mick Somerset, Archer, trumpeter Kim Macari Stone-Lonergan, vibes player Corey Mwamba, guitarist Anton Hunter, and percussionist Peter Fairclough. All, as it happens, are accomplished bandleaders in their own right. Some are familiar names; Fairclough and Mwamba played on Archer’s Engine Room Favourites record in 2015, for instance.

Speaking of that release, Archer continues his pursuit of the AACM aesthetic, and remains convinced of the value of that high watermark in American jazz. Speaking about it in the context of this project, he says he particularly wanted to arrive at music that was “improvised and personal to the players”, but also wanted to ensure it could be repeatable, with close attention paid to a structural form that would allow this. A certain tension between spontaneity and structure. As ever, Archer tellingly points out that “AACM musicians solved this…issue several decades ago”.

Part of that structure could be the “literary” theme, which adds a frame of sorts; it divides the music on Story Tellers into six Books, each with chapters, and each book telling the story of a particular imagined character. Well, more like an archetype perhaps; for instance, Mick Somerset plays the role of “The Wounded Healer”, Archer is “The Casuist”, and so on. Some of the ideas here may have been inspired by or provided by Mick Somerset, who – though he plays a wide array of wind instruments and percussion – is a self-confessed outsider who works “on the periphery of jazz music”, and is feels more at home with words and stories. The Books are carefully structured, so that each one follows a set pattern – always starting with a stated musical theme to introduce the character, and including a solo section, and a coda. Further, the Books refer to each other, quoting musical phrases from the other Books as appropriate, to suggest cross-pollination and collaboration between the characters. Though what they’re playing is jazz, Archer has pretty much created a classical song cycle; “you could say…[it] comprises six versions of the same piece” is his take on it.

The aim with this book structure and array of characters is not to tell a story in a conventional sense; rather I take it as a metaphor for the collaboration itself, an expression of the way that the players co-operate and interact with each other, “infecting” each other’s themes with their own. This could be further taken as a metaphor for all music (all successful music at any rate), where the joy of creation becomes a shared activity, and not merely a selfish indulgence for one person, a charge that has often been levelled at lead guitarists taking excessive solos in rock music, or any self-indulgent player who merely satisfies their own needs, ignoring the other players, and even ignoring the audience. Conversely, the good vibes of this group transfer directly onto the grooves here – “we had a ball making it”, to use Archer’s own expression – and will pass onto all who hear it. From 10th August 2016.