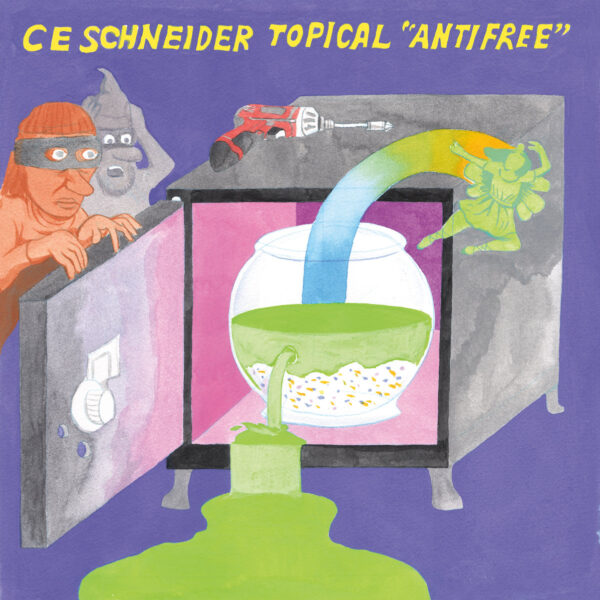 Finding much to enjoy on the LP Antifree (OSR TAPES OSR#48) by CE Schneider Topical, the singing duo of Christina Schneider and Zach Phillips, an album recorded in 2015 in Brooklyn. You may recall we just recently noted their contributions to a blue flexidisc from Belgium, and their appearance on the record by Maher Shalal Hash Baz, plus the highly active Zach Phillips has come our way before on records by Blanche Blanche Blanche and Big French. He plays a lot of the instruments on this LP, but so does Schneider, who has a songwriting credit on all but one of these 17 songs, and she’s the lead vocalist throughout. Antifree is a highly entertaining record of what I call “avant-pop”, a term I’ve used to describe diverse bands such as Family Fodder, Jack O’ The Clock, The Residents, Amos & Sara, and many other offbeat melodicists. If we could characterise most of the songs on Antifree, I’d point out the bizarre and highly inventive melodies, which (unlike most conventional pop) don’t rely too heavily on repetition, or a simple verse-chorus structure. There’s something more ingenious going on with the songwriting. Secondly, I’d draw attention to the unusual musical arrangements, using adjectives like “eccentric” to describe the sound and the instrumentation. There’s a lot of guitars, and tight drumming, but also some old-school non-digital keyboards, such as the Clavinet and the Wurlitzer piano, the latter an instrument favoured by Hamilton Yarns, that charming UK band of underground popsters. Zach’s technical skill here (he engineered it) has been to achieve this natural home-grown sound using an open-reel tape recorder. Nothing tweaked, and it shows; Christina’s assured vocal performances shine in the mix, and the music hasn’t been bled dry by digital reworking, meaning each song soars for its few brief minutes on earth.

I’ve tried on today’s listen to engage with the lyrical content of these non-rock songs, with their titles such as ‘Female in Images’ and ‘Exit All Seasons’, and find them completely cliché-free; not a hackneyed phrase in sight. But I’ll also admit defeat; the lyrics are slightly impenetrable. Somehow Christina keeps the subject at arm’s length for the duration of the song, with her unexpected turns of phrases that really keep the listener on their toes. She also sings them totally straight, by which I mean without affectation or vocal tics. I feel that I ought to be able to decode these songs in time, but it’ll take a few listens. I’ve previously compared this duo’s records to Brian Wilson Beach Boys productions, and think this is still valid, but these songs don’t have the innocence of Pet Sounds (mind you, in 2016, who does?!), and it feels like a lo-fi Wilson production pushed through a modern, suburban, and ironic filter.

As an album that keeps on perpetually surprising the listener, Antifree comes highly recommended, as a unique example of contemporary American songcraft. I see Mark Kramer did the mastering, and this record often puts me in mind of another personal favourite “avant-pop” duo, Bongwater, which Kramer led with Ann Magnuson. Luke Csehak of The Lentils plays lead guitar on one track, and Billy McShane adds saxophone to another. The charming surreal cover art was painted by Matthew Thurber. From May 2016.