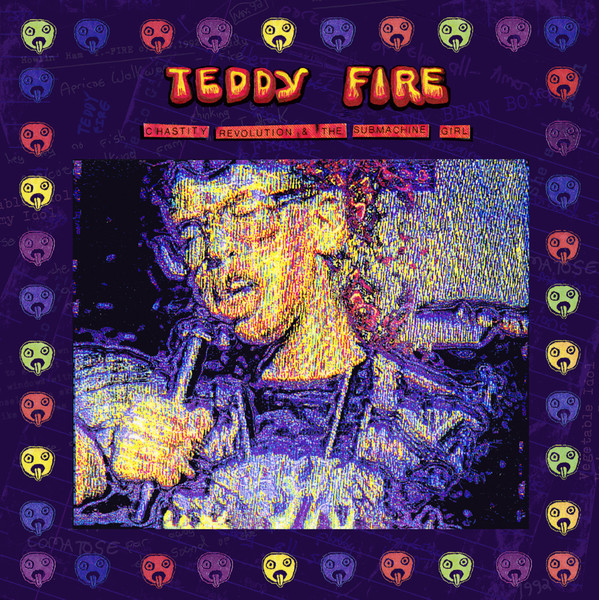 Continuing their mission to bring us the finest in far-out and eccentric obscure music, and then press it on vinyl, Feeding Tube Records bring us the work of Teddy Fire and Iguid Fidd on the LP Chastity Revolution And The Submachine Girl (FTR 245 / P&R-LP-004). The music, originally recorded in the mid-1990s, was made by the DJ and record-collector Pablo Yglesias and featured his teenage brother Teddy on vocals; they did it using a home recording studio and oodles of attitude and wild imagination. Supporting them are the band Iguid Fidd, including pro musicians such as the guitarist Bond Bergland from Factrix, plus Miki Navazio, Fritz Fox, and Phil ‘Nordit’ Scher. But it’s safe to say that Pablo Cuba and Teddy Fire are the stars of this particular wayward entertainment.

Cuban-American Pablo is an expert in Latin and funk music, and is also a writer and historian besides being a musician. Latin and funk aren’t quite in my line (although I do frequently indulge my taste for Funkadelic), but I can groove on the sheer weirdness and vitality of Chastity Revolution. The vocals of Teddy Fire hit me first…abrasive and mean on opening track ‘Howlin’ Ham’, I soon learned to love his endearing semi-innocent manner of vocalising, and even the press notes invite comparisons with Jad Fair. He raps in a fetching non-professional manner, by which I mean he’s not trying to sound like a million other 1990s hip-hop rap artistes, nor engaged in a competition to pack as many words as possible per square inch into the vinyl. There’s something about his delivery I can’t shake off; he walks a knife-edge between insouciant cool and impassioned pleading as he struts his way through these surreal raps.

Speaking of which…as a feat of writing alone, the verbiage on this release ought to be nominated for some sort of special prize for warped street poetry. No wonder a printed lyric sheet has been included. T. Wulff and P. Yglesias have written some memorable mind-curlers, each one a compelling comic-strip vision of bizarre proportions, and people by such madcap characters as Harry Comatose, the Jello Girl, and Frank The Lima Bean Boy. I’m wondering if these raps began life as comics, or drawings. “Why don’t you say the rest?” “Well, I can’t, it’s a drawing, but I’ll try.” That’s from ‘Electrical Smile’, one of my favourites on the album, which comes close to creating a snapshot of a film noir nightmare that even surpasses Tom Waits.

There’s a lot of guitars on this album, along with the beats and distorted production, which may be because of the number of guitarists in the band (assuming they’re not all part of a hoax). I’m no expert but that is some funky, greasy guitar work. The press notes point out the way a track can shift from psychedelic freak music to R’n’B without batting an eye, which is true, but I’d like to add rockabilly to that mix, even if it’s inappropriate to do so. It’s all that reverb, you see. What an oddity…and a delight. The record is a joint release with Peace & Rhythm, Pablo Cuba’s vinyl label. From 17 May 2016.