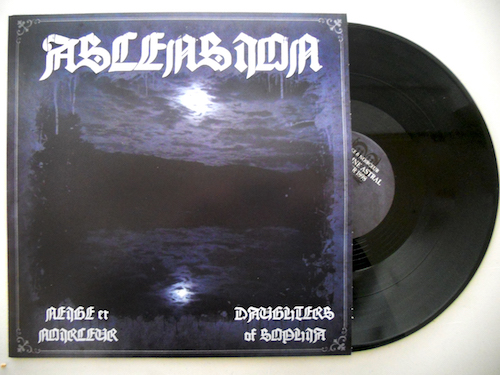 Neige et Noirceur and Daughters of Sophia don’t have a lot in common so the fact that they share space on this release was enough to grab my attention. The only thing the two acts share is that each features one multi-instrumentalist member – but then, so do so many other bands. DoS is an atmospheric BM / post-metal band interested in spirituality and transcendence whereas NeN is an ambient BM project with an experimental drone side and an interest in Quebecois history and the history of World War I so listeners familiar with both acts might expect plenty of contrasts, musically and lyrically, between the two.

Each act offers two songs, one long song followed by one short one. NeN gives a varied and often beautiful piece combining plenty of atmospherics, subtle acoustic melody, a subdued mood and raw biting yet still tuneful BM in the aptly named “Automne Astral”. The sense of a radiant golden summer gone, to be replaced by freezing blizzard winter ferocity, and the foreboding and emotion associated with the transition are strong. Distinct melodies and riffs along with a sharp raw sound power the song for most of its journey until the music lapses into a gentle conclusion, still repeating the dominant music motifs as if trying to capture the memory of what was once vibrant and energetic but is now extinct. “Hiver 1898”, recalling the severe Canadian winter of that year is a mostly quiet footnote, interesting mainly for the use of synthesiser atmospheric effects and the stern uncompromising drone that finishes off the song.

The contributions by French act Daughters of Sophia are very melodic but compared to NeN, not as varied and are even monotonous in the never-ending scrabbly tremolo guitar grind. The mood in both tracks seems hopeful and bright but that’s probably the best I can say for these pieces. The DoS man tries every tool and trick to deliver momentous and epic post-BM drama in “Orchestration Oceanique” (the first track) but the riffs don’t stand out much at all. The music is too busy and its pace is relentless. While there’s plenty of energy and the journey seems adventurous and arduous, the track seems fussy. Perhaps if a few lyrics had been included here and there as anchors in the music to help shape it and give it direction, the track would be much improved. “Deluge 218” is a pleasant piece with a bristly tone, a cold spacey atmosphere and more vibrato guitar melody but it seems like an extension of the previous track and doesn’t offer anything new.

I definitely think Neige et Noirceur offers much better music that could show DoS quite a few lessons on how to create long self-contained tracks of varied mood, melody and sound. Of all the contrasts I had expected between the two acts, I definitely did not expect a contrast between good atmospheric music and monotonous scrabble. I have heard previous DoS music recorded way back in 2011 and that was definitely nothing like the music on this split album. Here’s hoping the split represents an exception for the French act and not the rule.