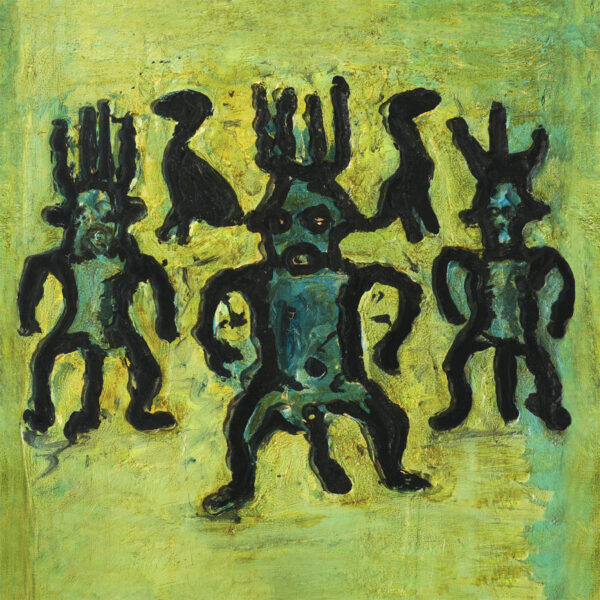 A recent chapter in ex-Sun City Girl Alan Bishop’s saga of map-hopping exploits catches him in Cairo-based cahoots with like-minded lunatics Sam Shalabi and Maurice Louca for a turbulent turn in team-building. At the risk of selling it as Bishop’s thing, The Dwarfs of East Agouza sound like they might have been distant cousins of the Sun City Girls, had they grown up in post Arab-Spring Cairo instead of Phoenix. But it’s very much an egalitarian effort; blending distinctively non-western percussion, rambling microtonality and the awkward/irascible brand of echo-peddling psych-rock the Girls would lapse into now and again. And as per efforts such as Valentines From Matahari, there’s an assurance that the music’s charms will not be immediately evident.

What’s quickly clear however is that all sense of restraint has been canned: jams ring out in all directions for up to thirty minutes and ain’t about to stop for your peace of mind, nor mine. Or else they ramble on in muttered tones like Bishop’s Uncle Jim in caustic toad mode. In few other conditions could ‘Baka of the Future’ fake it as a sampler track, where itching beneath a bouncy bassline and narcotic organ riff we hear the signature scrapings of Alvarius B’s Jackson Pollock guitar. Skip through the 10-minute excursion and witness the trio almost suffocating in its own smog; the boys getting their groove on where most of us experience mental problems. Yet despite this airborne aggravation, their initial aimlessness achieves lucidity in all cases, and after repeat playbacks their sounds soak deeper into the nervous system.

For all the music’s purported lack of polish, there’s also a sense that the Dwarfs are trying hard not to sound like they’re trying hard. They want not for impish mischief nor discipline, and were it not for poly-musician Louca’s rhythmic chops and unseated tonal stylings, Shalabi and Bishop’s jagged and disgruntled string manipulations would be on much shakier ground. His horse-powered hand-drumming brings calm cohesion to the same chaos his shape-shifting keyboard modulations help to create; encompassing the whole nine yards between Arthur Russell-style organ stabs on ‘Hungry Bears Don’t Dance’ and opiate-drowned dream imagery in ‘Resinance’, both of which aim to resituate us in less defined modes of being. I will take this opportunity to remind you to buy his excellent solo album, Salute The Parrot.

The 30-minute ‘Museum of Stranglers (I-III)’ is everything you’d expect from a cosmic, side-long closer: A climatic creatio ex nihilo in dead air of echo pedal guitars; flutters of Alan Bishop’s recent post-skronk saxophony; the wooziest, most Lovecraftian electronics to manifest thus far; psych-rock tropes unleashed in full force; long stretches of little evident interest; time folding between threadbare lows and celestial highs where oblique and charged power lines soar, bestial purrs and gurgles taper to zero and an inverted, no-wave reprise (of sorts) of the opening theme marking our return to the point of origin. Even for a group with such avowedly irrational proclivities this lurching epic is a perversely gratifying patience-tester; the longer one listens, the stronger the sense of dissociation. A worthy debut to be sure!