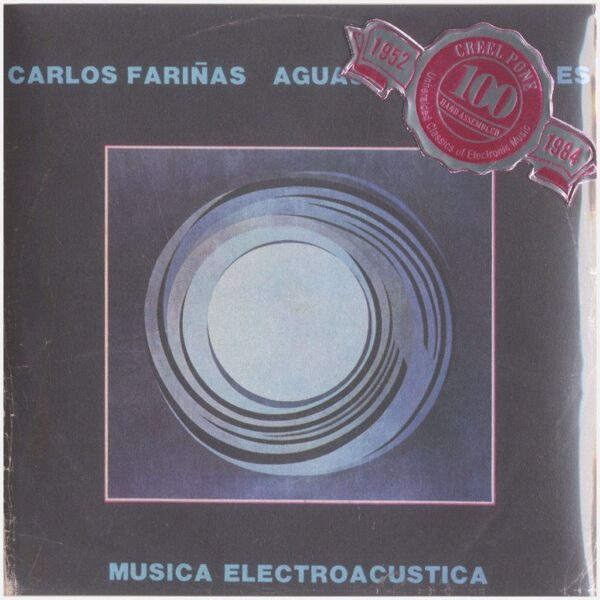 In an effort to release as much historical experimental electronic music in their current double-set limited edition series, Creelpone elected to pop these two Cuban recordings from the early 1980s together on the one disc. Both recordings, originally released separately by Empresa Grabaciones Y Ediciones Musicales (EGREM) – a Cuban record label founded in 1961 responsible for releasing many significant Cuban and other Latin American recordings in homegrown and regional contemporary music genres, jazz and rock – are nearly equal in length at about 33 minutes and 34 minutes respectively.

Farinas leads off with the two long tracks that make up “Aguas Territoriales” (“Territorial Waters”). “Madrigal” is an unobtrusive though far-ranging electroacoustic piece of shrill bird-whistle melody fragmentation overlying a long drone that develops into a serene, radiant electro-symphonic epic. It’s a very graceful introduction into this archival set. “Aguas Territoriales” the title track features field recordings of water bubble that become crazed and demented as they pass through reverb and drone treatments when you might expect they would be plop-plop still and quiet. Both long pieces reveal a very unexpected and mischievous humour on Farinas’ part.

JMB’s “Caballos” (“Horses”) starts as a lively and playful melodic recording, dominated by analog synth, with plenty of galloping rhythms and frivolous flights of twittery fancy. Chase scenes and light-hearted dramas flit by as the horses run from one corral to another and back. As this work progresses – it was originally written for the stage – it expands into a full soundtrack of electro-orchesral ditties and field recordings embracing many moods and feelings. Birdsong appears among pure clean-toned electronic tunes and musique concrete sounds suggesting light industrial work and explosions.

A lot of fun is to be had on both these recordings though they’re very different in style and approach. The ages of the two composers may be significant: Farinas was in his 50s and JMB in his 30s at the time their recordings were released. JMB’s “Caballos” is the more extroverted and busy work, heavy on melody and constant light-fingered activity. Farinas seems more interested in creating mood and suggesting that water may be alive in its own perhaps demonic way with special effects. Both works complement each other very well and provide an  entrée into Cuban electronic experimental music during the Cold War.

The CD-R is available from Broken Music.