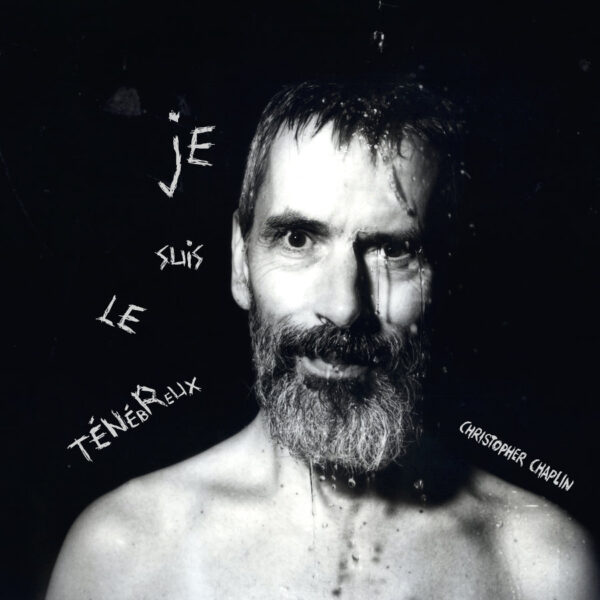 Christopher Chaplin is an English composer who formed a connection with Hans-Joachim Roedelius, dating from the time when he did a live performance of his work in Austria. The pair seem to have enjoyed a number of collaborations since, starting with an appearance on the Late Junction radio show, and then the release of the King Of Hearts album in 2012. John Norman noted that release here, finding it a somewhat hit-or-miss experience, but when it did succeed the music impressed with its “secret mutterings of the insides of things” and strange juxtapositions of sonic elements. Today we have before us Je Suis Le Ténébreux (FABRIQUE RECORDS FAB58CD), a new Chaplin composition for the Viennese label Fabrique Records. That’s him on the cover looking like a strange reverse-Messiah figure, a glint of madness in his wide-eyed glare. Once again contributions are featured from the veteran Cluster-Harmonia genius, who adds piano and synths, and his voice. There’s also spoken word and narration from Christine Roedelius, the French soprano-actress Judith Chemla, and the poetess Claudia Schumann, who also supplies texts that are central to the theme of Je Suis Le Ténébreux.

As to this theme, it’s based on the so-called “Enigma of Bologna”, an epitaph written in Latin on a Roman tombstone, sometimes known as The Aelia-Laelia-Crispis Inscription. The tombstone was discovered in the 16th century (the album erroneously claims it was written in the 16th century), and since then has grown into something of a puzzle; some 18 lines of text packed with paradox and contradictions, alluding to a figure that’s neither male nor female, nor hermaphrodite. By the late 17th century, anguished scholars had already come up with 43 different solutions to the riddle, claiming variously it was a description of “the rain, the soul, Niobe, Lot’s wife, or a child promised in marriage that died before its birth.” Another view said it described an animal (a mule or donkey) rather than a human being. Later interpretations have found elements of alchemy, psychology, spiritualism and philosophy buried within this compacted text; Jung wrote about the Enigma, and so did the French writer Gerard de Nerval 1, in two tales Pandora and Le Comte de Saint-Germain; de Nerval is further referenced (however briefly) by Claudia Schumann’s poetry on this album.

As befits this “enigmatic” theme, Chaplin’s record is music that’s shrouded in darkness and layers of hinted meaning, and vague allusions scattered throughout the texts which are sung, spoken, whispered, or otherwise handed over to the listener in packages that themselves must be unwrapped and decoded. English translations of Latin and German are provided in the booklet (whose pages, by the way, are all black backgrounds) to help with the decoding process, but it’s likely that Chaplin wishes to protect the mystery of this strange riddle. The music, a studio-bound assemblage of synths and pianos, is mostly a sort of complex and progressive electronic drone with highly sinister connotations, but carefully structured to avoid any sort of conventional musical resolution. Each piece just continues to march grimly through a void, shrouded by veils of unknown blackness, with no clear end or destination in sight. Yet there’s still a sense of drama; in places, as though we’re hearing a stripped-down version of a Purcell opera, recast for post-modern times with a huge dose of irony and stripped of all context.

“Not much can be said about the enigma, other than it holds a certain fascination”, writes Chaplin in his sleeve note. I wondered why I found myself slightly disappointed with this apparent blithe indifference of his. Perhaps I’d be happier if he showed the same sort of feverish obsession with his text as those early scholars who devised 43 different interpretations of it. At times Claudia Schumann seems more engaged with meaning than he is, especially on the final track ‘The Enigma (Reprise)’, where the solemn intonations of both the Roedeliuses add a certain weight to the texts. There’s also much to be said for the other Roedelius contributor, Rosa Roedelius, who supplied the art pieces which are photographed on the covers. They resemble little raviolis of various size, and are no doubt intended as puns on the female genitalia. If The Enigma Of Bologna does indeed contain themes of sexual ambiguity, Rosa’s sculptures seem to have hit the target first time, and more effectively than Chaplin’s cautious, measured treading. Even so, this is an unusual item which you may wish to investigate. From 20 September 2016; also available as a double LP.