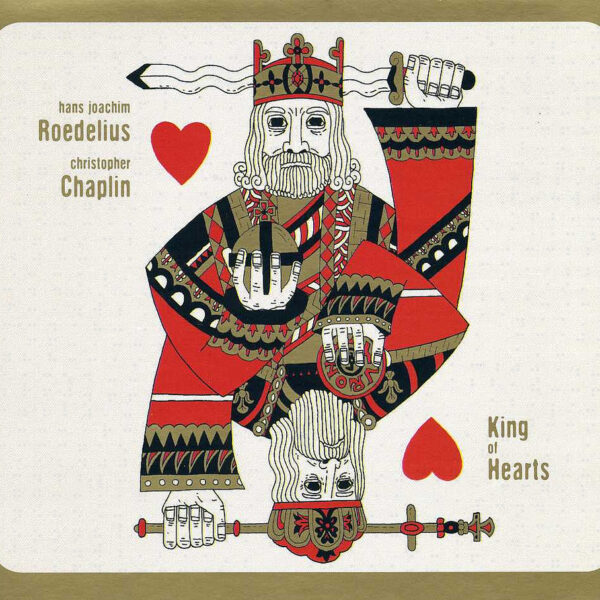 Roedelius, a prolific veteran of electronic music, and Chaplin, actor and trained pianist lately taking up composition, get together to make engrossing atmospheric pieces – concocted from Chaplin’s keyboard, and made more intriguing with studio layering. This is thoughtfully made music, each track an attempt at something different, resulting in some that catch the imagination, and some that fall flat through self-indulgence.

Better the uneven hit rate than not discovering any magic at all though…and following on from the lacklustre opener, track 2 is the most special concoction of the set – the expectations are hushed with the promise of auteurs of noodly moods at work. This is the secret mutterings of the insides of things. The brushstrokes are added with just the right poise. Night falls, the systems keep ticking over, nearby but distant sounds of traffic, a car alarm – the soundtrack of a restless city night heard from deep within. The finale is marked with a car door slam. “Mais Oui” indeed!

Another goodie, “tout-À-fait” reveals the imaginary corner that time forgot, conjured up on clarinets and depth charge keyboards. Simple and haunting bringing in a tinge of those Eno days. Well, actually later there is a track from another time, time, time – from another time – “aussi bien” is a loving take of “By this River” from Eno’s Before and After Science, and after all, Roedelius was one of its creators back then. You might yearn for Brian’s deadpan but soothing vocal at this point – all 11 tracks are instrumentals, although a German speaking voice breaks in on “evidement” – which gets near to a Penguin Cafe skip and hop, and does at any rate get joyfully tutti. Unfortunately, ich spreche kein Deutsch…

Some of the material (“bien sur” for example) feels like it falls between stools of not being ambient enough to sit back and wear around your head, nor composerly enough to trace with your brain, nor off the leash enough to get feet moving or teeth gnashing. They are consummate and considered, but there’s still more levels they could rise to. The noodling nods off. Even so, at worst there’s still some clever interplay woven around the plainest of ideas – their muso mojos are never switched off. And in a gorgeous syncopated texture like “mais oui” you feel that at least the rootless hybrid gets you to a few unique places.

This disc comes in an arty minimal packet full of the promise of rarefied treasure. The central thread of it is Catherine Brisset playing the cristal baschet – a 20th century cousin to the old glass harmonica, created in the 50s by Bernard and Francois Baschet. Playing it involves stroking a lot of chromatically tuned glass rods. The opening piece gives an idea of the range of wonderful otherworldly sounds that can be extracted from this unusual instrument. The glass is rubbed, sings ethereally and ruminates in a yawning span of tones. Brisset plays a composition of deeply distilled music of the spheres – an unhurried contemplation of the vastness of creation contained in a water drop. The chatter of galaxies bouncing off the Universe’s plumbing.

The music is crystalline and abstract, hard to get a handle on, needing patience in the listening to try and extract sense of design – but it seems deliberate and purposeful, not a note wasted. Sometimes its a space trip, sometimes more of a regular 12-tone dash. Things get more earthbound as the baschet is joined for a series of duos and trios by violin and cello, violin and clarinet, a harpsichord, a flute…through a series of 9 works by 8 different composers. My favourites tend to be the ones that stay “out there” – solo baschet, or duo with tape or electronics – a special recommendation for Thierry Alla’s tape textures of weightless substance on “Nebuleuse”, which bring to mind some of those BBC Radiophonic alien planet atmospheres.

Despite some longeurs, it’s an impressive, beautiful, but chilly world of sound to get immersed in.