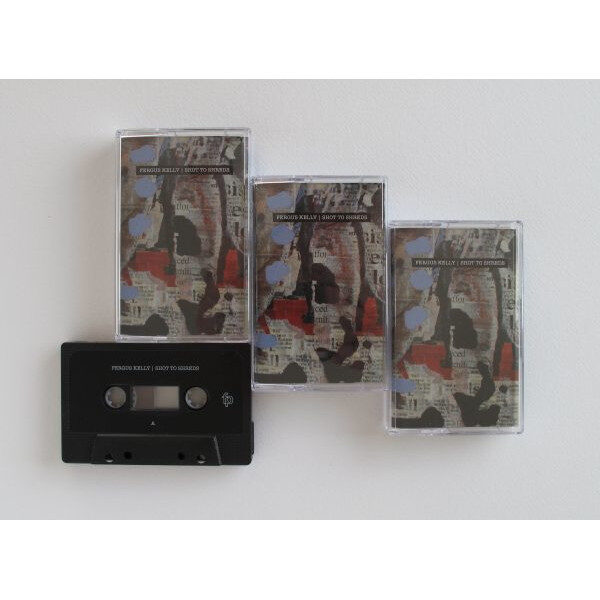 Welcome return of Fergus Kelly, the Dublin-based sound artist, with his new cassette Shot To Shreds (FP057) on the lovely Farpoint Recordings label. Last heard him in 2012 with his album A Congregation Of Vapours, noted as a fairly noisy and raucous entry in the electro-acoustic arena, and we’re pleased to say his interest in ugly electronic crunchery, nasty feedback, semi-industrial gruntings and lumps of metal continues on this tape. The A side is a suite of seven abstract bursts under the heading Debris Field, a title which instantly conjures visions of a junkyard, a trash pile being remade into art in some way. Even the collage cover art, with its daubs of paint smeared over newsprint sheets, could be read as the sort of thing we’d find pasted to the hoardings near this imaginary junkyard, or scraps stuck forlornly on the corrugated iron walls around the compound. The label describe this side as “a tactile and disintegrating landscape of fractured spaces and skewed geographies”, implying strongly that Kelly continues to layer field recordings into his work. On this occasion it’s a glorious maximal bash, one that both celebrates and decries the grime and grit of urban concrete hell that continues to blight parts of the UK (and Ireland, evidently), hemming us in with its unfinished building projects, broken walkways, and unkempt roads. It’d be cool to think of Kelly as a subversive lover of the “derive”, but he doesn’t wander around these scapes like some French intellectual, and instead he takes them for what they are, producing sprawling noise with no clear beginning and end, much like the piles of trash that clearly inspire him.

The B side is more cerebral than the punk-rock inflected A side. Four diverse pieces, including ‘Impact Spatter’, ‘Discrete Oblique’, ‘Cored’ and ‘Closing The Circuit’ are more recognisable as collage and cut-up works, often using musical elements to make their ambiguous statements, and making judicious use of “time-stretching” to slow down certain layers. Taken at a sitting, this B side produces strong hallucinatory and dream-like states in short order. The cut-up voices on ‘Discrete Oblique’ border on nightmare, otherwise innocent and everyday remarks taking on a horrific tinge as they’re juxtaposed with absurdist fragments of musical snatches and chord ripped out of context. The lovely ‘Cored’, a personal favourite of mine, is dominated by a grinding heavyweight drone of metallic feedback that all but crushes the skull under its mighty weight. The “relentless sonic snowstorm”, as the press notes would have it, is a remorseless exercise in piling on an excess of noisy content, almost like Merzbow in slow motion. It includes a slowed-down sample from ‘I Want You (She’s So Heavy)’, one of The Beatles’ finest attempts at rendering the onset of the apocalypse in music. The grotesque noise of that 12/8 guitar figure, awash with white noise from George Harrison’s Moog synth, is to a noteworthy statement of sheer doom, better even than the end of ‘A Day In The Life’. Here, in among Kelly’s intense stew of digital violence, it has found a proper home. The programme of side B – it is a well-sequenced album, for sure – means that we end with ‘Closing The Circuit’, a seven-minute composition supposedly making use of “vacated spaces”, and intended to provide aural relief to the battered listener after the onslaught of the 13-minute ‘Cored’. But it doesn’t relieve us of the sense of foreboding or doubt, and we leave the world of Fergus Kelly freighted down with more sorrow and uncertainty than before.