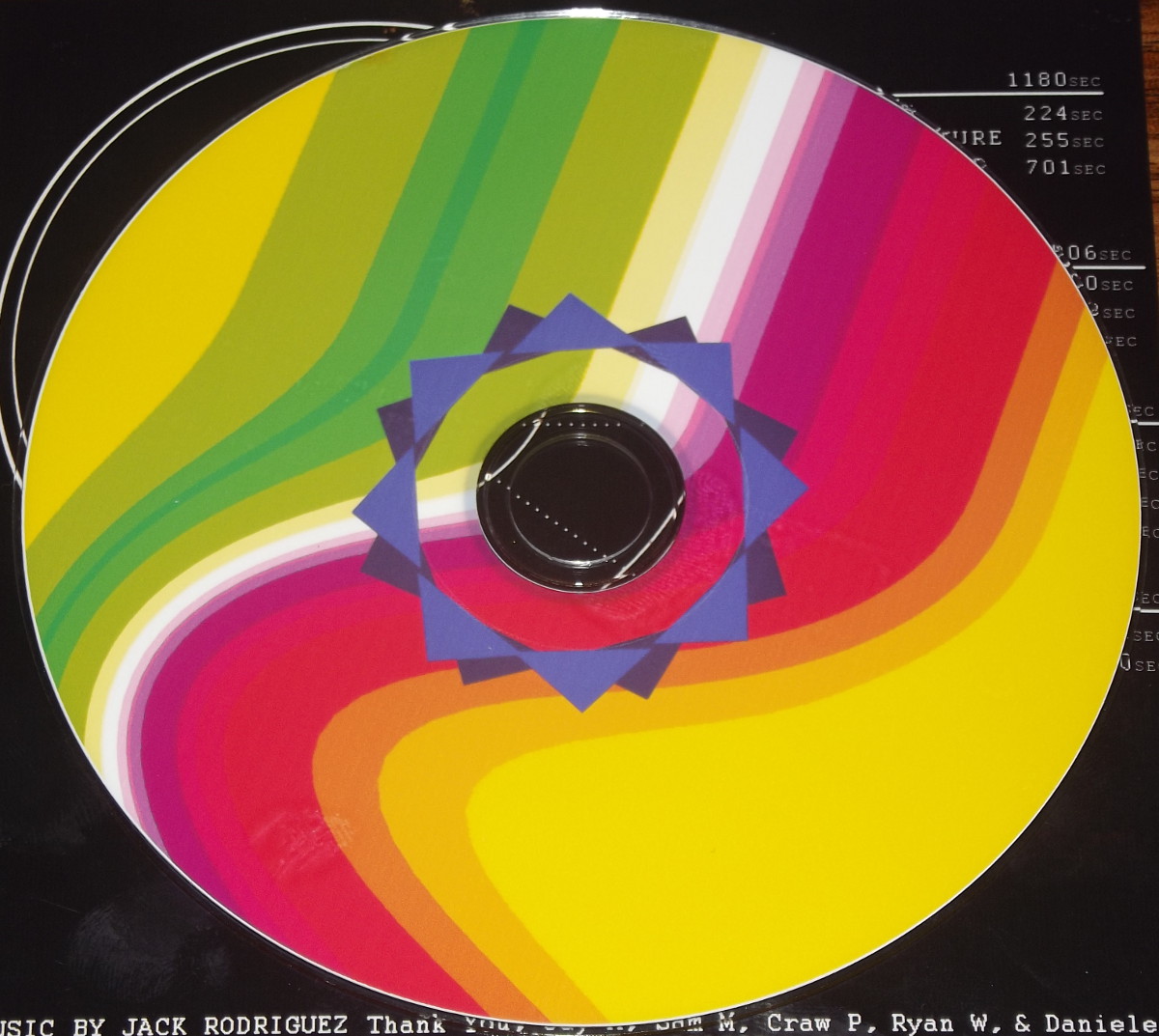 Pity me…I’ve been ill with a nasty strain of flu twice this month, and it’s putting a crimp in many of my plans. If you were expecting a radio show this week, sorry to disappoint you, but it’s this rotten illness what did for me last Friday, when I should have been on the air but was instead stretched out like a numb cadaver on my rack of pain and coughery. Now for some CD releases.

Jan Klug and Kasper van Hoek recorded Music Played On A Monday (HEILSKABAAL RECORDS HK021) at the Mohr Institute. Just fourteen minutes of music from these worthy Netherlandish fellows on this mini CD. The event or occasion was “Max Meetup”, a kind of musical swap meet where I suppose musicians, laptoppers and tech buffs all compared notes about their use of the Max / MSP software. One of these days I really must find out what this transformative software actually does to sound, and try to understand why so many musicians are attracted to it. On this recording Klug plays woodwinds, Theremin, and the famous Crackle Box invented by Michel Waisvisz, while the prolific Van Hoek has his home-made stringed instruments. It’s fair to say the experience of a Monday which they present is much the same as that of many people – lethargic, uncertain, and laced with a certain dread. Some interesting sound effects pour out of the churning aural melange, but the music is rather unstructured and refuses to amount to much more than just interesting combinations of tones and textures. This is another Monday morning effect, well known to anyone who works in an office, where your thoughts just cannot connect and you flit miserably from one incomplete task to another. From 11 June 2012.

Boy Fruit‘s Demonology (DEBACLE RECORDS DBL079) promises plenty with a Satanic title and cover images of eyeless lost souls, but the music turns out to be routine mashups of beats, hiphop, techno and funk, occasionally messed up with spoken-word fragments from FM radio announcers; nowhere near as crazy as it would like to think it is, its looping daftness grows wearisome quite quickly. Not enough effort was spent by Jay Harmon of Cincinnati to transcend his sources, and what he creates is virtually indistinguishable from what he cuts up. From same label, Firstdog‘s Corecore (DEBACLE RECORDS DBL077) is slightly more successful, with its illogical streams of video-game music going completely nuts. Jack Rodriguez, making his full-length debut, takes “wonkiness” as his guiding aesthetic and attempts to tame his inherent melodic waywardness by setting it to minimal dubby beats. When he released this, he had a much better name (First Dog To Visit The Center Of The Earth) but has now curtailed it to Firstdog for some reason. These both from 6 June 2012.

A great piece of electronic analogue noise from Jason Soliday, here billed as J. Soliday on his first proper CD release, Nonagon Knives (CIP CIPCD027). CIP label boss Blake Edwards would put his own head on a guillotine to make sure that Chicago music gets the recognition it deserves, and in print form he’s waxing lyrical about this album until he froths at the mouth. No wonder, though, since Nonagon Knives is a real slicer. Soliday has a lot of the violence and force in his work that makes noise music attractive to so many sickos and masochists (indeed a lot of the audience often begin and end with the violence), but he also has a strong understanding of how to manipulate the stereo field in his favour. At times he pulls off tiny miracles of mixing and panning, situating his barbs, bombs, and boulders at marked points in the imaginary listening space with remarkable assurance. We also find much to admire in his very varied textures, which run the gamut from barbed wire necklets to scalding jets of acid in the mush, not forgetting the layers of painful igneous rocks which sear our running feet. To cap it all off, there’s Soliday’s impeccable timing and dynamics, executed through a powerful mix of lightning reflexes, ultra-sharp editing skills, and sheer instinct; he makes these shocking events collide and germinate with terrifying precision. This music was all generated with modular synth systems, instruments which (I would guess) are much harder to control than their digital counterparts, so this may be another index of Soliday’s great skill. I think the label is correct to compare him with modern electro-acoustic composers; in purpose and method, he has more affinities with the extreme end of the INA-GRM label than he does with Merzbow. Stern, rigid music with a core of pure titanium; an exciting and invigorating listen which I recommend. Only the sleeve image is kinda drab, though I suppose it strikes a suitable keynote of darkness and ambiguity with its digital abstractions. From 25 June 2012.

Equally thrilling is A Congregation Of Vapours (FARPOINT RECORDINGS FARPOINT 038), from the Dublin sound artist Fergus Kelly. This talented fellow gets his effects from combining feedback, home-made electronics, digital processing, field recordings and lumps of metal, plus he makes judicious use of the no-input mixing board as promulgated by Toshimaru Nakamura. The first thing we note about Kelly is that he’s some way from being a pure minimalist, and the best parts of this album just roar out at you with the barely-controlled rage of ancient giants playing quoits or whatever it was they did in ancient times in mythological Éire. We also note that Kelly will never leave a black space on the canvas when he can cover every surface in sight with a luscious abstract drone of some description. The third point in his favour is the very naturalistic / organic vibe to his music, which is intended to be as bracing as rain or seawater in the face, and it refreshes the mind as surely as a good icy March wind against yer cheeks. It’s not just the layered field recordings of the wind and the rain, at times the music itself is as forceful as the very weather that inspires it. Paul Hegarty contributes notes to this release, and while at first I thought we might have another potential noise artist poised for release on Hegarty’s DotDotDot Music label, in fact the abiding keynote here is one of restraint. True, the album gets off to a feisty start with the exhilarating ‘Freefall’, but thereafter it tends to settle down into slower and more meditative music, revealing Kelly’s attention to detail, the way he can discover an inner pulsebeat in the most seemingly inert and unlikely places, and bring it to life. Some of the titles allude to tools we can use to navigate our way around space, both interior and exterior spaces – maps, patterns, sonar, horizon points and so forth, while titles like ‘Pressure Drop’ and ‘Heat Signature’ also feel significant somehow in this regard; a well-attuned human being might be able to use their sense of ‘pressure drop’ to determine how many people are packed inside an auditorium. Perhaps we’re all blind men stumbling about the world, with need of music to steer us like ancient navigators used the stars to steer their vessels. Perhaps also Kelly has an interest in revealing invisible things, like an aural infra-red camera. Kelly is a successful collaborator and composer with numerous activities to his name, including radio broadcasts, public performances, festivals curated by him, and a teamup with the UK improvisers Mark Wastell and Max Eastley. The man even runs his own CDR label. Considering that this method of working is quite commonplace now (I mean especially the mixing of field recordings with everything) it is all the more testament to Kelly’s skills that he produces music of such distinction. One might be tempted at some point to compare him to another Irish electro-acoustic grandee, that is the famous Roger Doyle, but Doyle had a bit more interest in narrative I think. From 11 June 2012.