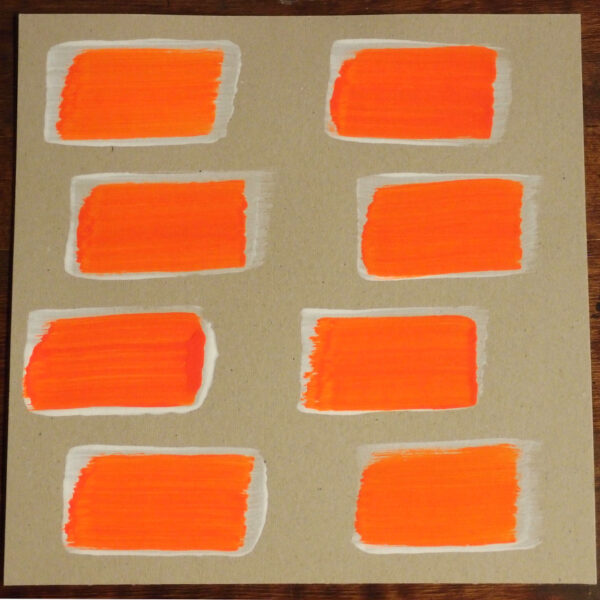 It must take a bit of dogged self-belief to release a weighty 2LP of one’s own vocal improvisations when a) one is not, by trade, a vocalist and b) one lacks the urgency to make as good a session of it as might happen during an adrenaline-fueled live set, but this is exactly what the prolific, multi-disciplinary journeyman Jason Kahn has done on Songline: four sides of vinyl, four GPS-free vocal improvisations that do what the tin says, or in this case the heavy card sleeve with symmetrical daubings of neon orange poster paint – a primitivist mosaic that as good as informs listeners that while Kahn’s vocal palette may be limited, his strokes are bold and appealingly rough-round-the-edges.

Hiding himself away like some hermit in the main room of a former Swisscom telephone relay station one winter evening in 2015 – the glass-sealed solitude broken only by gurgling from ‘deep in the bowels of the building’ – Kahn bulldozed his voicebox through the twilight with the tenacity of a magic(k)ian intent on invoking and capturing intact guileless, demonic beings. Sealed in the darkness of each groove is a complete idea or expression of a single ‘thematic and technical area’ as he puts it, entering swiftly with side A’s graveyard of gruelling and grievous groans, which reveal some prodigious lung capacity. Some might register death bed exhalations, but they’re more like the respiratory warm up a corpse might carry out when returning to a state of stunted animation. Trying to ‘sing’ along to it soon proves to be an effective exercise for the listener as well, which perversely introduces an audience element into an explicitly one-sided equation. Side B shapes A’s emphysemic pallor into more robust and sustained vowel chants that course through the air like stretched and flattened yodels that get right into the skull if one strays too close; beaming across space like some post-apocalyptic, long-distance communication device. Side C graduates through great globs of glottal, feline hiss and longer pauses between these attacks (on his own throat as much as the now-terrified audience) onto D, where he exhibits his widest range yet of anguished groans, growls, yowls and other tokens of his prolonged discomfort.

By Kahn’s own admission, the recording process was largely an exploration of his vocal limitations; of pushing himself ‘towards the brink of failure… exploring new ground, reaching for the cracks in my vocal chords’ with as best an approximation of the spontaneity one might achieve before and audience. And it’s this same self-aware spirit that makes Songline so easy to return to. There’s a time and a place for the developed comic strip vocalese of your Phil Mintons and Henri Chopins, but Kahn has the good grace to pursue each of his simple ideas to fruition over a full side of vinyl, investing in his performance a level of concentration only possible in a distraction-free environment, where the pursuit of novelty might otherwise derail each train of thought. Kahn makes no claims to grandeur, and in this modesty lies a dash of intrigue.