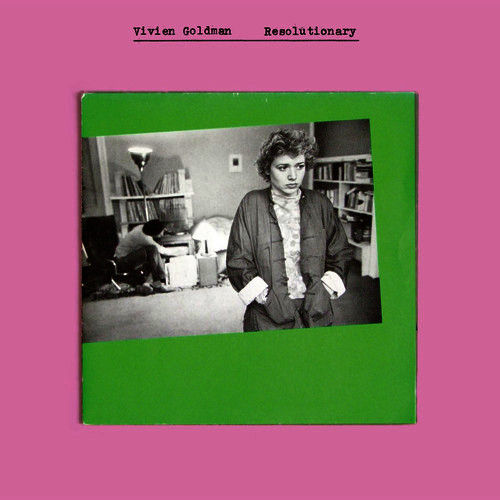 My recollections of singer/journo/broadcaster Vivien Goldman only really amount to two things: her role as a guest vocalist with the Flying Lizards and as a co-presenter on T.V.’s “Big World Café” 1, where her green leather suit was seen as a triumph of left-field tailoring by yours truly. So, if like me, you’ve missed out on a fair bit of her back product, the Staubgold retrospective, joining the dots between releases on labels various, will be a precious godsend. Initially Viv began seriously vocalising as an oohs’n’aahs backing singer on a number of Adrian Sherwood productions, but her real debut in the post-punk spotlight began with a pair of tracks with the aforementioned Flying Lizards. An amorphous entity in which members of Aswad and The Slits mingled with the cream of the capital’s avant garde. “Her Story” and “The Window” are extracted from the Lizards’ debut full-lengther. The second cut, a lyrically ambiguous piece of deconstructed post punkery has a sweetness and light vocal waft that certainly masks a darker couplet or two. “…sometimes I think he’s a vampire, he’s making holes to drain blood…” A supernatural threat from Mr. Alucard or an instalment from an abusive/controlling relationship? Perplexing ain’t in it.

“Launderette”/”Private Armies”/”P.A. Dub” was initially put out as a Rough Trade and/or 99 Records twelve-incher and was overseen by the Lydon/Levine/Goldman triumvirate. Track one’s storyboard must surely rank as one in a miniscule number of songs that sets a romantic tryst in a coinwash (the other that springs to mind being “Little Does She Know” by The Kursaal Flyers). The darker, anthemic “Private Armies” and its dub obverse links male impotence with gun fetishism (sounds about right…) amid rubbery bass action and Viv’s withering sarcasm, delivered again in high register, where butter wouldn’t melt.

Chantage (formed with fellow chantoosie Eve Blouin) came together, albeit briefly, in the early eighties when Viv upped sticks to Paris. Their one-off on the Celluloid imprint sees a thirteen-deep throng (including Steve Beresford and The Pop Group’s Bruce Smith) blurring styles like it’s going out of fashion. All manner of contempo genres morphing seamlessly into this gallic melting pot. “Do it Twice” (a Wailers cover) and “It’s Only Money” with its exuberant steel pans, backporch violin and supple African guitar lines were so goshdarn commercial/eighties radio friendly, easily leaving their contemporaries like Weekend and Carmel eating stale quiche. I’m amazed that an album containing more hook-laden cosmopolitan chic failed to get off the blocks.

Viv’s creative wellspring certainly hasn’t run dry as the “Punk Professor of the N.Y.U.” has recorded house twelve inchers and co-written tracks with Coldcut and Massive Attack etc etc…but I doubt whether Staubgold would dip their toes into those particular waters thirty odd years down the pike. So, for me, it’s the 1979 to ’82 portion of Ms. G’s past that I’ll set a place.