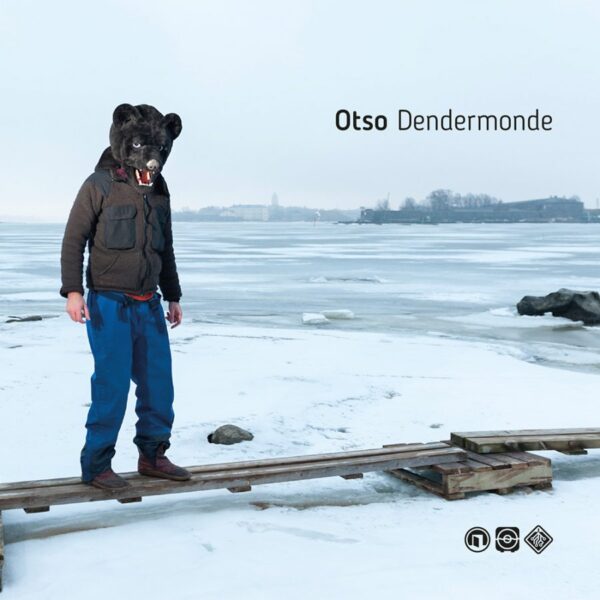 Otso Lähdeoja is a Finnish composer, guitarist and “omnidirectional researcher of all things sonic”, who also describes himself as a “man of many faces and many places”. One of those faces is ursine, judging by the cover of this CD. There he is, capering about in a bear mask on some unsafe-looking walkways over a frozen lake, like Disney’s Baloo transported north of the Arctic Circle. Time to forget about your worries and your strife, then, with four tracks of “music for phantoms and ancestors”.

This is a small but perfectly formed offering which confounded my expectations quite pleasantly. There’s a fair amount of glitchy hissing, field recording and distorted vocal samples, which at first made me think it was going to be standard electronica/ambient/experimental fare. But it quickly became clear that this is actually a psychedelic rock record with modern avant-garde trappings.

Opening track “QC Underground” sets the pace, as the vocal loop quickly gives way to some chewy guitar figures and harmonica drones. I also like the title, which suggests some sort of clandestine organisation of barristers. Next up, “Banshee”, where murky bass and drums open up into sunshine bursts of full-throttle Hendrix-style guitar. “0verwinning” reminds me of the more pastoral interludes of ‘70s German kosmische bands, before it all ends in the harmonica fantasia of “Mue End”.

Apparently, the album was conceived as an act of “technologic shamanism”, the bear acting as a totem that connects current and past lives. It’s also described as a search for an “electronic blues” sound, which I kind of get, as it has that feel about it, without being blues, as such. That seems like quite a lot to try and achieve in four short tracks, but you can’t fault the ambition.

Concise, focused and rather lovely. If you’re a bear with a sore head, this might just sort you out.