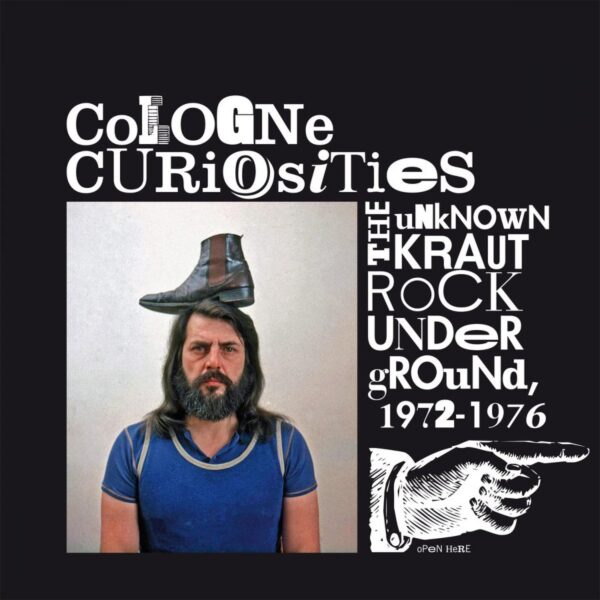 Cologne Curiosities: The Unknown Krautrock Underground 1972-1976 (MENTAL EXPERIENCE MENT005) is another outing for the recordings made by English producer Toby Robinson when he was working in Cologne in the 1970s. Using the Dieter Dierks studio during downtime, he produced a series of records for his own Pyramid label, issuing the LPs with cover paintings produced I think by local art students. Robinson played on a number of these projects, and the largely unknown musicians were swapped around between bands much like a Kosmische Wrecking Crew. Some of the Pyramid label records were reissued around 1996-97 by Gary Ramon on his Psi-Fi imprint, and indeed we noted them in issue #2 of TSP magazine. Around the same time, Trevor Manwaring was compiling tracks for the Virgin compilations Unknown Deutschland – The Krautrock Archive. It was at a time when there was a lot of interest in rediscovering krautrock in the UK. Some experts in the field had their doubts that the records were even genuine, but I think this myth has now been dispelled. I’d go so far as to ask myself how “unknown” these bands really are now, given that this is the third reissue programme for this music (and Mental Experience promise more to come).

The Astral Army – in their themes, not unlike Gong making wild claims about the power of radio waves and space travel. In sound, they made a heavy-handed rock pounding with excessive lead guitar noodling, and a singer who seems to be imitating Iggy for no good reason. Score 1 so far for a typically stodgy 70s Germanic sausage-fest…

Spirulina features the keyboard player Manfred Hof who also played on the Golem record from this label. ‘The Message’ is a superb piece of Pink Floyd exploratory drifting with a lush string-synth drone. Wisely, the band stay in the same place pretty much for ten mins, with some slightly more energetic freaking out as they reach a stargate dimensional warp at the end. What message is vouchsafed on this instrumental noodle? None at all, and I’m grateful for that.

Chronos were a three-piece of guitar-bass-drum nobodies which Toby Robinson used as a platform for his far-out synth burblings on ‘Schaudernacht’. Robinson soars like an analogue flying squirrel over the ancient rooftops of Cologne, but the guitarist isn’t doing the music many favours with his insistent strums and riffs, which eat up most of the available ether. Even so, there’s an urgency to this one that could easily have passed muster with the most astringent and austere New Wave band of 1979.

On ‘Feuerwerk’, Neil Andersen gives free expression to his soul through a solo guitar and synth turn, overdubbing himself as needed. Can’t resist saying that as a “firework” it’s a very damp squib. Not enough structure or inherent melody to this soggy morass for my ears. But the overall sound is strangely pleasing. With his meandering burbles, Andersen might have found a home in MIMEO that sprawling improv orchestra of the early 2000s, whose music resembles this in a superficial way.

Baal features members of Spirulina and Chronos, showing how the Pyramid label could build “house bands” through interchangeable versatile players. Their song ‘No God / Astaroth’ stands out on this comp for its coarse, snarly textures – it’s a blues-based growl presumably containing some lament of protest about society’s restrictions. They may have had Edgar Broughton Band in mind as a model, yet it also emerges inadvertantly as one of Viv Stanshall’s blues-inflected parodies. The weedy keyboard soloing is quite at odds with the aggressive push of this boozy grunt-a-fest.

Ten To Zen is the band for you if you snarfed up this comp in hopes of feeding your Tangerine Dream fixation. This band comprised three synth players, Dieter Ruf, Henni Gatjens, and Jan Klaska. Their ‘Innerst’ thus stands alone in this company for being all-electronic, but the fellows also have a strong rapport as a team, and their three machines – hopefully those enormous Moogs that were housed in mahogany cabinets – lock together in a satisfying cosmic throb. Ten To Zen also were capable of nuances and delicacy in their tonal shadings, an achievement which it’s hard to attach to most of the other thumpers on this label.

Fuerrote sees Neil Andersen back in action, this time teaming up with Toby Robinson and the guitarist Hans Lorenzen. Their ‘Ganz Wie Due Willst’ is one of the stronger sets on the record, has more by way of dynamic change and illogical shifts in mood, and generally casts the same sort of grisly hue as The Nazgul, which was one of the darker-themed Robinson projects from this period. The trio work themselves into a genuinely unsettling and uncertain place through their stately, free-form explorations, enhanced by just the right amount of studio effects.

These seven cuts can be yours to savour yet again, on double vinyl LP or CD. Remastered by Toby Robinson and with liner notes by Alan Freeman. From 6th October 2016.