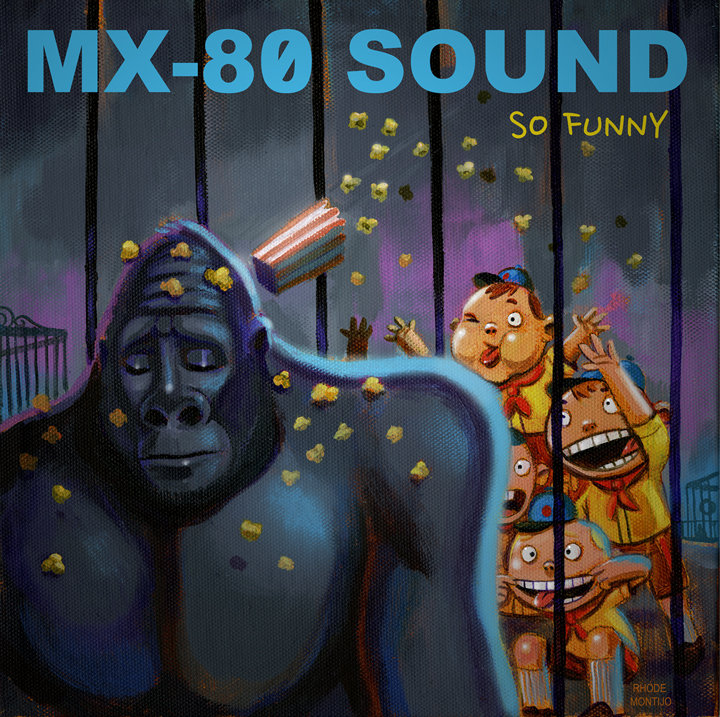 May I declare myself a long-standing fan of MX-80 Sound, one of the more unusual American bands to have ever been tagged with a New Wave or No Wave label, a love affair which began when I snarfed up a UK Island pressing of their Hard Attack LP in Coventry. It was a time when Woolworths still existed, they still sold vinyl records, and they marked down items they couldn’t sell, so I secured this tasty zonkeroo for about 50p. Since I was also in love with The Residents at the time, it wasn’t too long before I found out about MX-80 Sound’s superb LP releases for Ralph Records, namely Out Of The Tunnel and Crowd Control, all of them gems. I’m still looking for an original of Big Hits, their debut EP, but it’s rare and costly. Byron Coley, who has done the press for the band’s new LP So Funny (FEEDING TUBE RECORDS FTR250) is also a loyal supporter I assume, since he interviewed the band for Forced Exposure magazine in 1991 and put them on the cover too. During that interview, he demonstrated arcane knowledge of their discography that even the band didn’t know about. Coley also penned an authoritative essay on this Indiana band for the Superior Viaduct CD reissue of Hard Attack, a release which is worth owning for that sleeve note alone, although the remastering of it is also excellent. Well, MX-80 Sound never gave up in all that time, despite lack of commercial success; my 50p cut-out story is only one manifestation of their inexplicable inability to sell large numbers of records.

1977’s Hard Attack pretty much comes roaring out at you like an out-of-control heavy truck, except you then realise the truck is following a crazy roller-coaster route of its own making and the drivers and passengers have a laconic, offbeat sense of humour, and mean no harm. On So Funny, there may not be the same effusive and scratchy energy, but the core trio of Bruce Anderson, Dale Sopheia and Rich Stim still have their own unique electrical voice. On these grooves, I would characterise it as a weird blend of guitar chords creating mixed frequencies that probably shouldn’t really work, but they do. I have that same sensation of being drenched, almost drowned, by these guitars as I enjoyed in 1981. I also savour the way that all the guitar parts are slightly mismatched, as if we were hearing the aural equivalent of an off-register screenprint made by Andy Warhol and his team; MX-80 Sound have never seemed to particularly care for being a “tight” band, and it’s one of their greatest strengths. Stim’s singing voice is another irreplaceable element, and I still savour the bemused tone he evinces as he rattles off his slightly surreal lyrics and slanted observations. Why did we ever settle for Michael Stipe when we had Rich Stim?

This LP, recorded in California around 2013-2015 (the band moved to the Bay Area in the 1970s, which is probably how they hooked up with The Residents and could be aligned with the SF New Wave “scene”) was originally issued as a file-based album on 2015 on their own label, and now surfaces on vinyl. The band are fleshed out by a new drummer, Nico Sophiea, and the guitarist Jim Hrabetin (who also played on two Family Vineyard releases in the late 1990s). Original drummer Marc Weinstein sings on one track. Along with the songs, the band continue their preoccupation with surf guitar-like instrumentals, and soundtrack music – hence cover versions of ‘A Man And A Woman’, John Barry’s ‘Goldfinger’, and oddest of all the ‘X-Files’ theme. None of these are taken completely seriously, and the sleek menace of the James Bond tune is replaced by a faintly absurdist humour. The X-Files music ends up far stranger than the original theme, and seems to emerge from a place that accepts alien abduction and UFOs as everyday occurrences. I’m delighted with this record, and only the goofy cover painting by Rhode Montijo puzzles me. Even so it’s possible to read that image as a metaphor for the way that veteran bands like MX-80 Sound are treated by the uncaring youth of today. From 6th September 2016.