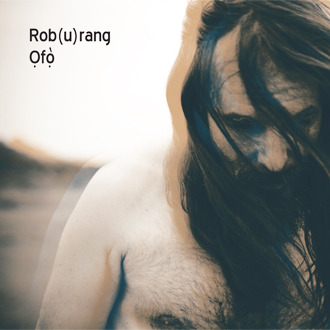 Within the lurid sleeve depicting producer Gabriel Séverin’s (Rob (u) rang since 2000) bared chest lurk nine pieces of electronic avant pop music; detourned somewhat with what appears to be an attempt to thread a seam of African occultism throughout. Specifically, he informs us that he employs yorùbá spells – writings and recordings thereof I’m assuming acquired himself – from trips to Nigeria and Benin. The accompanying booklet attached to the inside of the fold-over digipak includes these texts along with translations into English.

Judging by the sound of the opening track, “Le Lion Et Le Gazelle”, the esteemed Mister (u) rang is quite busy enjoying the process of recording music without paying too much attention to the detail; the music is ragged, sounds cobbled together or barely held together, with mismatched delay times while pre-set rhythm settings (a vintage Ace Tone Rhythm Ace drum machine from Rob’s own collection, no less?) predominate. But that’s the whole idea and it’s a good one. This mildly wonky approach works well with the material and results in a deliberately unbalanced listening experience.

On the third track, “Begin to understand”, Séverin credits himself with “subterranean bass guitar”. Did he actually bury it? Flute weaves around percussion samples that have blunt, soporific edges almost like what I imagine 23 Skidoo might have sounded like on Nytol. As it progresses, heavily processed harmonium courtesy of Xavier Klaine fluctuates.

Séverin covers some ground stylistically. “Àjídéwe” I could describe as acoustic breakbeat, while “Les puisatiers” – “The Well Diggers” – has a flute bed that wouldn’t sound out of place in the background at a travellers’ hostel in Goa. In the booklet in amongst the spells is a piece of text by Laszlo Umbreit – the field-recordist responsible for the Sounds of Europe website – about the physical act of digging a well: “…things get perilous 5 or 6 metres deep, because the soil grows soft again as you get close to the water. You have to know when to stop before the hole, now ten metres deep, collapses over the digger…” “Oògùn eti didi” on the other hand, is flecked with jazz with a repeated bass motif. “Ìdáàbòbò ?ba lówó ikú” features pitch-shifted vocals, heaving woodwinds and woozy electronics. Bringing things to a close, the final piece, “Oògùn éf?rí” is a maelstrom of contrasting elements; tablas spar with the trusty Rhythm Ace, buzz-saw guitars compete with what could be samples. The results are disorientating and strange.

A fine set of transporting vintage electronics mixed with medicated afro-funk elements – which in the wrong hands might result in an unholy stew of Fela Kuti meets Klaus Wunderlich – here, reminiscent of what used to be called “chill-out music” in parts, but with a sharper, darker edge. Tradition meets modernity across continents.