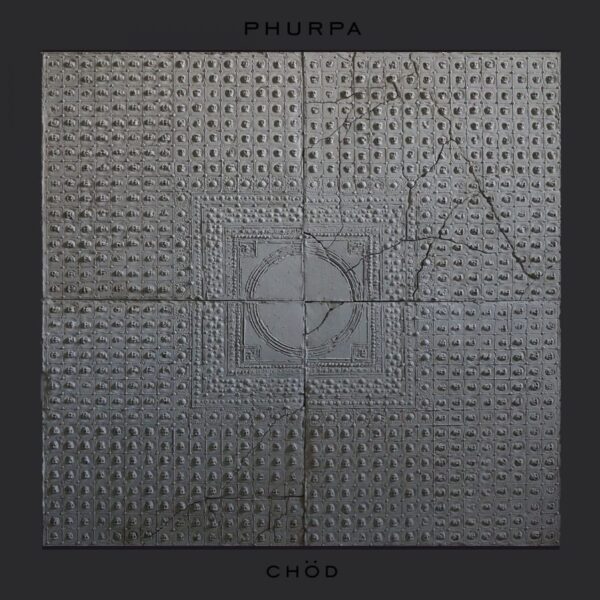 From mystics such as Blavatksy, David-Neel and Roerich 1 to one time rituallists like Current 93, O Yuki Conjugate, 23 Skidoo (Culling era) and the thighbone-trumpet-wielding phase of Psychic T.V., it seems that the remote mountain kingdom of Tibet has been a source of fascination for a considerable amount of time. Phurpa, who’ve been engaged in exploring ritual sonorities since the mid-nineties, can now be added to this rather disparate list of worthies. They’re a Russian collective founded by group conductor Alexey Tegin who’s flanked by Edward Utukin, Alexey Naumkin and Dmitry Globa, dedicating themselves to interpreting the authentic ceremonial music(s) of “Bon”: Tibet’s oldest Buddhist discipline.

Aside from the usual recording/mastering/design credits, Chöd plays its cards very close to its chest. Its enigmatic/austere sleeve art opens out to reveal blocks of Tibetan script, using a stark (now possibly overused) black gloss ink on coal black cardstock. There’s no mention of what possible arcane instrumentation might form the building blocks of these two pieces, coming in at a challenging 46.00 and 44.14 mins respectively. However, ultra-primitive drum thuddery and the occasional agitated bleat of massed thighbone trumpets (a.k.a. “the Kangling”) do come and go, but a major percentage of total body weight is swallowed up by the quartet’s slowly building beast-like utterances. It’s easy to think we’re hearing the sounds of a degenerate, cave-dwelling race, grunting their disapproval after discovering that evolution has declined to pay them a courtesy call.

Using a tantric overtone technique (similar I’d guess to that used on the Melodii Tuva c.d. on Dust to Digital/2007), the collective lung power employed here is pretty formidable and overwhelming and on face value, the Phurpa concept could be thought of as an outing in avant black metal accapella; standing before you, theatrics-free and as nature intended.